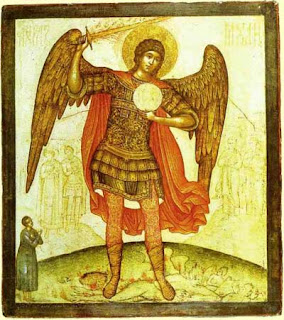 The Readings for Proper 28

It’s time to talk about “apocalyptic”, and here I am not talking about Mel Gibson’s film, or the up-coming one 2012, but rather a type of literature common to both the Hebrew, Islamic and Christian scriptures. The word “apocalypse” means literally “lifting the veil” and in such works, the reader is given a vision of unseen things.  Christians will be familiar especially with Daniel and the Revelation of Saint John the Divine, in particular, but also sections of the Gospel According to Saint Matthew as well.

Why apocalyptic now?  The themes in the lectionary at the end of the year, and at the beginning of the new liturgical year (Advent) overlap.  This is due to the fact that at one point, Advent was longer than four weeks, and the Advent themes of awaiting the second coming of Jesus (we are not talking about preparation for Christmas yet) and the talk of the “End Time” made for selections of apocalyptic books.  So it is that we have a reading from Daniel and from Mark that lend themselves to such interpretations, and speak to the Church waiting for the End Time.

The first reading is from the twelfth chapter of Daniel, and is the culmination of four apocalyptic visions in which the prophet (Daniel) sees what is to happen to Israel.  Set in Babylon during the captivity, these visions were probably set down at a later time (3rd Century BCE) but do give us insights into what people of faith were anticipating.  Ideas that make an appearance in this reading are the notions of “everlasting life,” resurrection, and a place of “everlasting contempt”, read hell.  These are ideas that come into Judaism from their contact with Zoroastrianism in Persia.  The Psalm is a “David psalm” and a confession of faith, contrasting the psalmist’s faith in the Lord, with those who are worshippers of  “other gods”.  The Epistle is again from Hebrews, and concludes the continuing reading that we have been following for several Sundays.  The Gospel reading from Mark is an apocalyptic discourse (Chapter 13) from Jesus that immediately precedes the Passion Narrative that begins in chapter 14. 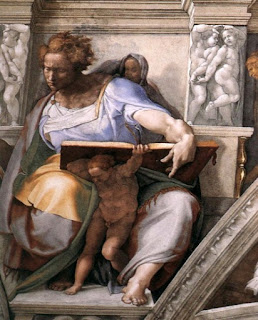 The Lord spoke to Daniel in a vision and said, "At that time Michael, the great prince, the protector of your people, shall arise. There shall be a time of anguish, such as has never occurred since nations first came into existence. But at that time your people shall be delivered, everyone who is found written in the book. Many of those who sleep in the dust of the earth shall awake, some to everlasting life, and some to shame and everlasting contempt. Those who are wise shall shine like the brightness of the sky, and those who lead many to righteousness, like the stars forever and ever."

Daniel is divided into two sections, the first six chapters dealing with the stories that surround the character of David, and the second section composed of visions and dreams.  Our reading this morning is from the second section, which was written later and in a different language (Aram) than the first section.  The entire book was probably brought together during the time that Israel was ruled by the Seleucid kings (Greeks who ruled out of Syria after the death of Alexander).  The comments about “your people being delivered” would have spoken to this audience, which chafed under the forced hellenization that these rules forced on the Jews.  We meet several Persian ideas/characters, namely, Michael the Archangel, and the notions of eternal life.  Here, Daniel sees into the future and sees that the people, though troubled and even dead, will rise to a new kind of life.

Psalm 16  - a translation by Robert Alter

for I shelter in you.

I said to the Lord,

“My Master You are.

My good is only through you.

As to holy ones in the land

And the mighty who were all my desire,

Another did they betroth

I will not pour their libations of blood,

I will not bear their names on my lips

The Lord is my portion and lot,

It is You Who sustain my fate.

An inheritance fell to me with delight,

My estate, too, is lovely to me.

I shall bless the Lord Who gave me counsel

Through the nights that my conscience would lash me.

I set the Lord always before me,

On my right hand, that I not stumble.

So my heart rejoices and my pulse beats with joy,

For you will not forsake my life to Sheol,

You won’t let Your faithful one see the Pit

Make me know the path of life.

Joys overflow in Your presence,

Delights in Your right hand forever.

Some words to learn: “Sheol” and “Pit” are expressions of early Judaism’s belief about death.  There was no heaven or hell, but rather a place where the dead went – something like Hades in Greek thought.   “Holy Ones in the land” refers to the gods of Canaan, and the Libation was a pouring out of wine, or other offerings, upon the ground as a gift to the gods.  In this confession, the psalmist is enthralled with the God of Israel.  The author’s comments are an intimate, physical reflection of how his/her love of God affects his whole body and existence.  The hope is that God will keep the author from “the Pit”, read death, and will lead the author on the “path of life”?

Every priest stands day after day at his service, offering again and again the same sacrifices that can never take away sins. But when Christ had offered for all time a single sacrifice for sins, "he sat down at the right hand of God," and since then has been waiting "until his enemies would be made a footstool for his feet." For by a single offering he has perfected for all time those who are sanctified. [And the Holy Spirit also testifies to us, for after saying,

"This is the covenant that I will make with them after those days, says the Lord: I will put my laws in their hearts, and I will write them on their minds,"

"I will remember their sins and their lawless deeds no more."

Where there is forgiveness of these, there is no longer any offering for sin.]

Therefore, my friends, since we have confidence to enter the sanctuary by the blood of Jesus, by the new and living way that he opened for us through the curtain (that is, through his flesh), and since we have a great priest over the house of God, let us approach with a true heart in full assurance of faith, with our hearts sprinkled clean from an evil conscience and our bodies washed with pure water. Let us hold fast to the confession of our hope without wavering, for he who has promised is faithful. And let us consider how to provoke one another to love and good deeds, not neglecting to meet together, as is the habit of some, but encouraging one another, and all the more as you see the Day approaching.

In this reading we have a remarkable picture of what priestly life was like in the temple.  “Every priest stands day after day”.  The priestly day was an endless succession of bloody animal sacrifices – not pretty.  In contrast to this picture of difficult work, the author of the Hebrews pictures Jesus as seated at the right hand of the Most High, with his enemies a footstool (a quotation from Psalm 110).  This is a poignant theological thought – the work of salvation is done.  There is no more need for the endless sacrifices; Jesus has finished the task.  The author also talks about how this completion affects the people of God.  Those who believe are pictured as “sprinkled clean” with bodies “washed with pure water.”  Keeping with our apocalyptic theme for the day, the reading ends with a note of anticipation, “as you see the Day approaching.”

As Jesus came out of the temple, one of his disciples said to him, "Look, Teacher, what large stones and what large buildings!" Then Jesus asked him, "Do you see these great buildings? Not one stone will be left here upon another; all will be thrown down."

When he was sitting on the Mount of Olives opposite the temple, Peter, James, John, and Andrew asked him privately, "Tell us, when will this be, and what will be the sign that all these things are about to be accomplished?" Then Jesus began to say to them, "Beware that no one leads you astray. Many will come in my name and say, `I am he!’ and they will lead many astray. When you hear of wars and rumors of wars, do not be alarmed; this must take place, but the end is still to come. For nation will rise against nation, and kingdom against kingdom; there will be earthquakes in various places; there will be famines. This is but the beginning of the birthpangs."

Before Mark enters into the action of the Passion Narrative, he has Jesus teach a lesson on “what is to come.”  The disciples are baffled and in wonderment of the world in which they live.  For simple men from Galilee, the great buildings of the Temple Mount, and the Roman fortress “the Antonia” were awe inspiring and baffling.  Jesus dismisses their wonder by pointing out that this is nothing in the larger scheme of things.  We have to listen to Jesus words, keeping in mind what is to come – suffering, crucifixion, and death.  The inner circle of Peter (the Prince of the Apostles), James and John, and Andrew are wondering, “When all things will be accomplished” – when will this ministry be done, come to fruition?  Jesus has not always promised sweetness and light.  “I have come to bring a sword.”  “Who is my mother, who is my father…”? Some new winds are blowing in Mark’s Gospel, and they are the beginning of something new – the kingdom of God that Jesus has constantly been teaching.  Next Sunday we will meet Jesus in a new light in a conversation with Pilate in John’s Passion Narrative.  They will talk about the kingdom of God.  Pilate will be thinking about palaces and imperium.  Jesus will be thinking about something totally different.

Blessed Lord, who caused all holy Scriptures to be written for our learning: Grant us so to hear them, read, mark, learn, and inwardly digest them, that we may embrace and ever hold fast the blessed hope of everlasting life, which you have given us in our Savior Jesus Christ; who lives and reigns with you and the Holy Spirit, one God, for ever and ever. Amen.