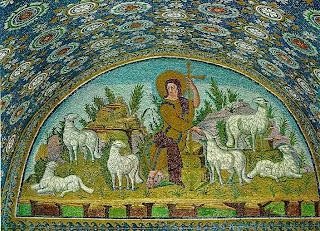 BACKGROUND
This Sunday is called “Good Shepherd Sunday” which will become obvious as we read through the texts.  The themes of sheep and of shepherds pepper both the Hebrew and Christian Scriptures, and often refer to kingship in ancient Israel (David was portrayed as a shepherd) and in relationship to Jesus as well (the son of David).
Acts 9:36-43
Now in Joppa there was a disciple whose name was Tabitha, which in Greek is Dorcas. She was devoted to good works and acts of charity. At that time she became ill and died. When they had washed her, they laid her in a room upstairs. Since Lydda was near Joppa, the disciples, who heard that Peter was there, sent two men to him with the request, "Please come to us without delay." So Peter got up and went with them; and when he arrived, they took him to the room upstairs. All the widows stood beside him, weeping and showing tunics and other clothing that Dorcas had made while she was with them. Peter put all of them outside, and then he knelt down and prayed. He turned to the body and said, "Tabitha, get up." Then she opened her eyes, and seeing Peter, she sat up. He gave her his hand and helped her up. Then calling the saints and widows, he showed her to be alive. This became known throughout Joppa, and many believed in the Lord. Meanwhile he stayed in Joppa for some time with a certain Simon, a tanner.
In the Book of Acts, Luke has two programs that are especially evident in our reading today.  One of those programs is to accentuate the ministry of women.  In this story we meet Tabitha, who serves as an introduction to this series of Christian women.  The second program that Luke brings to our attention is the establishment of the authority of both Peter and Paul.  With this reading we are in the Peter cycle of authority, during which Peter (and then later, Paul) repeats some of the miracles of Jesus, here raising Tabitha from death to life.  In addition to this, and we shall see this in coming readings, Peter learns to understand the necessity of a mission to the Gentiles.  Luke is picturing for us an early church that is rapidly growing and changing, and yet rooted in the Easter Faith.
Breaking open Acts
1.    If commentators are right in seeing this scene as Peter replicating the deeds of Jesus, which Jesus’ miracles does this story bring to mind?
2.    Is there a story from the Hebrew Scriptures that this reading recalls?
3.    Why was/is it necessary to assign miracles to Peter? 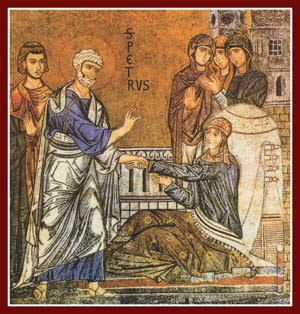 Psalm 23 Dominus regit me
The LORD is my shepherd; *
I shall not be in want.
He makes me lie down in green pastures *
and leads me beside still waters.
He revives my soul *
and guides me along right pathways for his Name's sake.
Though I walk through the valley of the shadow of death, I shall fear no evil; *
for you are with me; your rod and your staff, they comfort me.
You spread a table before me in the presence of those who trouble me; *
you have anointed my head with oil, and my cup is running over.
Surely your goodness and mercy shall follow me all the days of my life, *
and I will dwell in the house of the LORD for ever. 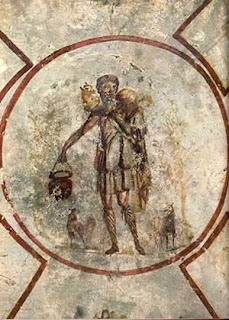 This psalm is so popular that it is almost impossible to comment on its meaning at either the time it was written, or as it is read today.  The psalm is supposedly a David psalm, which has certain logic to it, in that David’s legend includes stories of his being a shepherd.  For the small city-states of the Ancient Near East, such affinities (shepherding and kingship) were quite possible.  The closeness of agrarian life, and the role of kingship in securing the productive context of field and meadow made this compelling image.  The image in the psalm is associated with God, using the shepherd skills and situations as a metaphor for God’s care of God’s people.  For Christians, the association with Jesus is natural, Jesus himself making the comparison.  The setting of a meal, the anointing with oil, and the over-flowing cup are all rich associations for Christians who would call to mind the Eucharist, and Unction.  It’s popularity as a psalm at funerals is likely due to its close personal associations with individuals’ prayer lives, or with the verse about “the valley of the shadow of death.”
Breaking open Psalm 23
1.     Can you recite this psalm by heart?  Which version?
2.     What are the compelling images for you in this psalm?
3.     Has God been your shepherd?  How?
Revelation 7:9-17
After this I looked, and there was a great multitude that no one could count, from every nation, from all tribes and peoples and languages, standing before the throne and before the Lamb, robed in white, with palm branches in their hands. They cried out in a loud voice, saying,
"Salvation belongs to our God who is seated on the throne, and to the Lamb!"
And all the angels stood around the throne and around the elders and the four living creatures, and they fell on their faces before the throne and worshiped God, singing,
"Amen! Blessing and glory and wisdom
and thanksgiving and honor
and power and might
be to our God forever and ever! Amen."
Then one of the elders addressed me, saying, "Who are these, robed in white, and where have they come from?" I said to him, "Sir, you are the one that knows." Then he said to me, "These are they who have come out of the great ordeal; they have washed their robes and made them white in the blood of the Lamb.
For this reason they are before the throne of God,
and worship him day and night within his temple,
and the one who is seated on the throne will shelter them.
They will hunger no more, and thirst no more;
the sun will not strike them,
nor any scorching heat;
for the Lamb at the center of the throne will be their shepherd,
and he will guide them to springs of the water of life,
and God will wipe away every tear from their eyes."
Again we have another vision of St. John the Divine, and hear the hymn sung by the celestial choir.  There are several clues that the writer gives us to understand the situation at hand, and the audience that is being addressed.  In the first paragraph we see a demography of the early church – “all tribes, and peoples, and language” demonstrates that the church has moved beyond Palestine and into the rich diversity of the Roman Empire.  It is in this locus of diversity and of the Roman Imperium that we encounter the other difficulty.  One of the elders refers to “the great ordeal.”  Given the late date of this book, the author probably has in mind the reactions of the Roman imperium to the revolt of Jews in Jerusalem, and the subsequent Roman suppression of that revolt.  In addition the reforms of the Emperor Domitian (ca. 81-96), which viewed Christianity as an illegal cult, resulted in persecutions, principally in Asia Minor.  Many Christians perished under his reign, thus making for the “great ordeal.”
Breaking open Revelation:
1.    In the last verses, the seer describes the new life of Christians.  Can you locate the attributes of this new life? 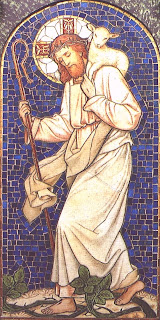 Saint John 10:22-30
At that time the festival of the Dedication took place in Jerusalem. It was winter, and Jesus was walking in the temple, in the portico of Solomon. So the Jews gathered around him and said to him, "How long will you keep us in suspense? If you are the Messiah, tell us plainly." Jesus answered, "I have told you, and you do not believe. The works that I do in my Father's name testify to me; but you do not believe, because you do not belong to my sheep. My sheep hear my voice. I know them, and they follow me. I give them eternal life, and they will never perish. No one will snatch them out of my hand. What my Father has given me is greater than all else, and no one can snatch it out of the Father's hand. The Father and I are one."
The Festival of the Dedication was a celebration in Israel that we know today as Chanukah.  This festival celebrated the defeat of the Seleucid Kings (after the death of Alexander, his general Seleucids was given control over what is modern-day Syria and Palestine) by the Maccabees.  It celebrates a miracle of relighting the temple candelabrum with too little oil.  In this context, the people around Jesus wonder aloud if he is the Messiah.  This is an appropriate question.  Substitute the Romans for the Seleucids and you can see the concern.  The implicit question is whether Jesus will take away the oppression of Israel by the Romans.  Jesus turns the metaphor on its ear, by noting that the flock (Israel) should recognize the voice of its shepherd (Jesus.)  Jesus declares that the question is moot – the real issue being that God (the Good Shepherd of Psalm 23) has given all the flocks (not just Israel) into the hand of Jesus, who is one with the Father.  Here Jesus and John move beyond Israel into the reality of the gentile church.
Breaking open the Gospel:
1.  Who else recognized the voice of the Shepherd (think Easter stories)?
After breaking open the Word, you might want to pray the Collect for Sunday:
O God, whose Son Jesus is the good shepherd of your people: Grant that when we hear his voice we may know him who calls us each by name, and follow where he leads; who, with you and the Holy Spirit, lives and reigns, one God, for ever and ever. Amen.