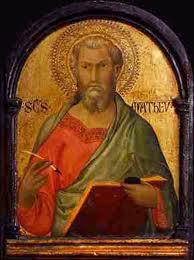 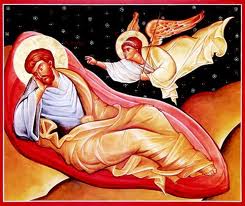 Whereas Luke’s attention in the Christmas story is centered on Mary, Matthew clearly focuses on Joseph, the dreamer.  Matthew sees him not only one who is tuned into the divine message, but also as a “righteous man”, and then evidences his holiness by citing how Joseph wished to treat Mary.  The angel intervenes and discloses what the purposes really are, and Joseph then becomes the obedient servant.  Matthew quotes the passage from our First Reading from Isaiah.  There is a difference, however, Matthew using the Septuagint (The translation of the Hebrew Scriptures into Greek) and its translation of “young woman” as parthenos (virgin).  This suits Matthew’s purpose well, for like Luke, he wishes to establish the virgin birth as a point in his narrative.  Here the passage from Isaiah takes on a new meaning.  Now the words are fulfilled in the birth of Jesus, son of Mary.  And like Isaiah, the child Jesus is indicated as God-with-us.  Isaiah looked forward to a period of a restored and messianic kingdom under a new “son of David”.  Matthew looks forward to the same thing, but it is the Kingdom of Heaven that will be described in his Gospel, not a David Kingdom.  Matthew’s program of “spiritualization”, of taking common ideas and giving them a divine and heavenly meaning (compare his Sermon on the Mount with the version in Luke) under girds the story of a child born to a common couple who then becomes the Savior of the world.
Breaking open the Gospel:
After breaking open the Word, you might want to pray the Collect for Sunday:
Purify our conscience, Almighty God, by your daily visitation, that your Son Jesus Christ, at his coming, may find in us a mansion prepared for himself; who lives and reigns with you, in the unity of the Holy Spirit, one God, now and for ever. Amen.