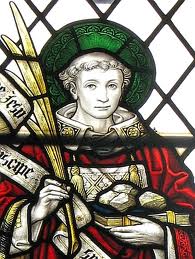 BACKGROUND: The Diaconate
One of the notable changes in church life in the last century was the revival of the diaconate as a permanent vocation.  In the past, candidates for the priesthood were first ordained to the transitional diaconate, and then ordained to the priesthood.  Although that still obtains, there are those now who are called to the permanent diaconate, who do not pursue priestly ordination after their ordination as deacons.  This role, as deacon, has ancient roots (see Acts 6, and Stephen, below) where seven men were charged with the task of serving charitable cases in the early church.  The permanent diaconate was not abandoned in the Eastern Church as it was in the West, where it became a step in the ordination to the priesthood.  Deacons, in the Anglican communion report directly to their bishops, and are charged with work in the community, work with the poor, the ill, those imprisoned, the homeless, and the hungry.  They work in conjunction with the priests in a parish, where their special liturgical ministries are the announcement of the Holy Gospel, the prayers, and service at the Altar.  The sign of their office is a diagonal stole, worn over the left shoulder, and/or the dalmatic.
Acts 7:55-60
Filled with the Holy Spirit, Stephen gazed into heaven and saw the glory of God and Jesus standing at the right hand of God. "Look," he said, "I see the heavens opened and the Son of Man standing at the right hand of God!" But they covered their ears, and with a loud shout all rushed together against him. Then they dragged him out of the city and began to stone him; and the witnesses laid their coats at the feet of a young man named Saul. While they were stoning Stephen, he prayed, "Lord Jesus, receive my spirit." Then he knelt down and cried out in a loud voice, "Lord, do not hold this sin against them." When he had said this, he died. 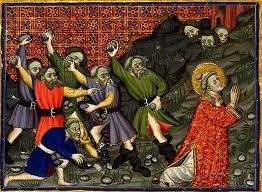 With the introduction of Stephen, Luke begins a program similar to that which he takes with both Peter, and later Paul.  Stephen, as Luke describes him, takes on several aspects of Jesus.  He is charged by the Sanhedrin with charges also leveled against our Lord: 1) blasphemies against Moses and God, 2) derogatory comments about the Temple and the Law, and finally, 3) the destruction of the Temple and the rethinking of Mosaic customs.  The Sanhedrin does not provide a verdict, or at least Luke does not record it.  Stephen’s execution seems to be more of a vigilante action, stoning being the punishment for blasphemy. Stephen reacts to the charges against him.  He preaches a lengthy sermon that accuses the Israelite leaders of being stiff-necked, and in opposition to the Holy Spirit.  Our reading takes up after this sermon, and the immanence of Stephen’s stoning.  His look up into heaven is an affirmation of the truth of his testimony, and he acclaims Jesus as “the Son of Man”.  Of special interest is the presence of Saul (Paul), who witnesses the execution.  Like Jesus, Stephen prays for those who will kill him, and the “receive my spirit” quotation is similar to the crucifixion of Jesus.  In the Church, Stephen is remembered as the protomartyr, the first of many martyrs that will follow.
Breaking open Acts:
Psalm 31:1-5, 15-16, In te, Domine, speravi
In you, O LORD, have I taken refuge;
let me never be put to shame; *
deliver me in your righteousness.
Incline your ear to me; *
make haste to deliver me.
Be my strong rock, a castle to keep me safe,
for you are my crag and my stronghold; *
for the sake of your Name, lead me and guide me.
Take me out of the net that they have secretly set for me, *
for you are my tower of strength.
Into your hands I commend my spirit, *
for you have redeemed me,
O LORD, O God of truth.
My times are in your hand; *
rescue me from the hand of my enemies,
and from those who persecute me.
Make your face to shine upon your servant, *
and in your loving-kindness save me." 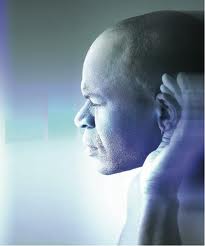 This is a psalm of supplication, which uses “boilerplate” phrases from other psalms and scriptures.  The image of God is highly anthropomorphic, with God being asked to “lean down” so as to hear the concerns of the psalmist.  The images that follow are a mix.  The psalmist describes his request to God, that God be a fort – a military protector.  In the following verse the images are that of a fowler, with the psalmist caught in a net.  The psalmist commends his “spirit” to God.  The “spirit” is not the soul, but rather the psalmist’s very life breath (ruah or nephes).  This psalm is chosen, perhaps, to give voice to Stephen’s mind as he awaits his death.
Breaking open Psalm 31:
1.     How is God your refuge?
2.     Do you have other persons who serve as your refuge?  Who are they?
3.     How do you repay them?
I Peter 2:2-10
Like newborn infants, long for the pure, spiritual milk, so that by it you may grow into salvation-- if indeed you have tasted that the Lord is good.
Come to him, a living stone, though rejected by mortals yet chosen and precious in God's sight, and like living stones, let yourselves be built into a spiritual house, to be a holy priesthood, to offer spiritual sacrifices acceptable to God through Jesus Christ. For it stands in scripture:
"See, I am laying in Zion a stone,
a cornerstone chosen and precious;
and whoever believes in him will not be put to shame."
To you then who believe, he is precious; but for those who do not believe,
"The stone that the builders rejected
has become the very head of the corner,"
and
"A stone that makes them stumble,
and a rock that makes them fall."
They stumble because they disobey the word, as they were destined to do.
But you are a chosen race, a royal priesthood, a holy nation, God's own people, in order that you may proclaim the mighty acts of him who called you out of darkness into his marvelous light.
Once you were not a people,
but now you are God's people;
once you had not received mercy,
but now you have received mercy. 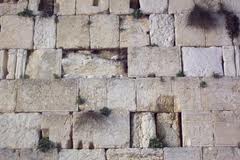 The first verse of this text used to be the verse of the Introit for the First Sunday after Easter, which was known as Quasimodo geniti (As new born babes…). It was the Sunday on which the newly baptized took off their white robes, given them at the time of their baptism at the Great Vigil of Easter. It is from this name that Victor Hugo’s character (The Hunchback of Notre Dame) takes his name.  In our reading for today, the author uses a series of images that are intended to describe the state of those who have been baptized.  Like the psalm for today, several images are used and to great effect.  Jesus is described as the chief cornerstone, and Peter urges his readers to likewise be stones, “living stones built up into a spiritual house.”  Other images are their status as the People of God.  The Hebrew Scriptures picture Israel as a priestly nation, courtiers in the Divine court, reading to offer cultic service.  Peter names the Christian initiates as the successors of this divine service and office.
Breaking open I Peter:
Saint John 14:1-14
Jesus said, "Do not let your hearts be troubled. Believe in God, believe also in me. In my Father's house there are many dwelling places. If it were not so, would I have told you that I go to prepare a place for you? And if I go and prepare a place for you, I will come again and will take you to myself, so that where I am, there you may be also. And you know the way to the place where I am going." Thomas said to him, "Lord, we do not know where you are going. How can we know the way?" Jesus said to him, "I am the way, and the truth, and the life. No one comes to the Father except through me. If you know me, you will know my Father also. From now on you do know him and have seen him."
Philip said to him, "Lord, show us the Father, and we will be satisfied." Jesus said to him, "Have I been with you all this time, Philip, and you still do not know me? Whoever has seen me has seen the Father. How can you say, `Show us the Father'? Do you not believe that I am in the Father and the Father is in me? The words that I say to you I do not speak on my own; but the Father who dwells in me does his works. Believe me that I am in the Father and the Father is in me; but if you do not, then believe me because of the works themselves. Very truly, I tell you, the one who believes in me will also do the works that I do and, in fact, will do greater works than these, because I am going to the Father. I will do whatever you ask in my name, so that the Father may be glorified in the Son. If in my name you ask me for anything, I will do it." 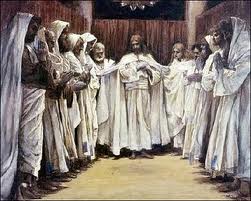 Following the washing of feet, Jesus takes time to instruct his disciples on the meaning of his departure.  Previous announcements about his fate have troubled and disturbed the disciples.  Now Jesus seeks to reassure them.  These assurances are interrupted twice, once by Thomas, who says, “Lord, we do not know”, and secondly by Philip, “Lord, show us the Father.”  The meat of these discourses is found in the notions of relationship and place.  First, Jesus wants the disciples to understand the fundamental relationship that he has with the Father.  Both are involved in the work of salvation, and Jesus emphasizes their unity and cooperation.  The second notion is that of place and presence.  The ubiquity of Jesus presence gives arguments about the place of his presence a sense of futility and ignorance.  The presence is seen in the work that the Father and the Son accomplish in the lives of those who follow.  In this way, Jesus is “way”, “truth”, and “life.”
Breaking open the Gospel:
After breaking open the Word, you might want to pray the Collect for Sunday:
Almighty God, whom truly to know is everlasting life: Grant us so perfectly to know your Son Jesus Christ to be the way, the truth, and the life, that we may steadfastly follow his steps in the way that leads to eternal life; through Jesus Christ your Son our Lord, who lives and reigns with you, in the unity of the Holy Spirit, one God, for ever and ever. Amen.