Saint Mary the Virgin, The Mother of Our Lord Jesus Christ - 15 August 2011


Saint Mary the Virgin, Mother of Our Lord Jesus Christ
Isaiah 61:10-11
Psalm 34
Galatians 4:4-7
St. Luke 1:46-55
Background: The Blessed Virgin Mary in Anglican Worship
In 1060, England became the first country to celebrate the Feast of the Assumption (15 August), and thus continued a tradition of veneration for the Mother of God that had been established with a Celtic Church at Glastonbury dedicated to the Virgin Mary in 65 CE.  This tradition was altered, somewhat, with the coming of the English Reformation.  First reactions included the elimination of images, Lady Chapels, feast days, and prayers.  Later generations, however, recovered a great deal of the ceremonial, theology, and liturgy that surrounded Mary.  Her place as the Mother of God and the theology of the Incarnation has earned her a respected place in the prayers and liturgies of the church.
Isaiah 61:10-11
I will greatly rejoice in the LORD,
my whole being shall exult in my God;
for he has clothed me with the garments of salvation,
he has covered me with the robe of righteousness,
as a bridegroom decks himself with a garland,
and as a bride adorns herself with her jewels.
For as the earth brings forth its shoots,
and as a garden causes what is sown in it to spring up,
so the Lord GOD will cause righteousness and praise
to spring up before all the nations. 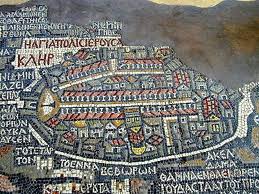 In this reading, we hear the vocabulary and theology of IInd Isaiah, as opposed to the previous chapters, where a IIIrd Isaiah wrestles with the difficulties of reestablishing Jerusalem.  Here the author envisions Jerusalem as a woman, clothed in wonderful garments that are themselves symbols of God’s gifts to the city: Salvation, righteousness, and praise.  These are high hopes for a set of ruins, that they should again be the signal of God’s presence in the nations.
It is understandable, then, how this reading is chosen for this day, which celebrates the Blessed Virgin Mary, the Mother of God.  If Jerusalem, in Isaiah’s vision, rises in glory from her ruins and devastation, so Mary in Luke is taken out of her commonplace status and exalted as the Mother of God.  She is clothed with righteousness, salvation, and praise as well; and is but the first fruits of such exaltation.  All baptized Christians are clothed with the same, and are graced with the hopes that are derived from her faithful service.  As such, she is not only a sign to the people of Israel, but like Isaiah’s Jerusalem, is also a sign and signal to all the nations.
Breaking open Isaiah:
Psalm 34 Benedicam Dominum
I will bless the LORD at all times; *
his praise shall ever be in my mouth.
I will glory in the LORD; *
let the humble hear and rejoice.
Proclaim with me the greatness of the LORD; *
let us exalt his Name together.
I sought the LORD, and he answered me *
and delivered me out of all my terror.
Look upon him and be radiant, *
and let not your faces be ashamed.
I called in my affliction and the LORD heard me *
and saved me from all my troubles.
The angel of the LORD encompasses those who fear him, *
and he will deliver them.
Taste and see that the LORD is good; *
happy are they who trust in him!
Fear the LORD, you that are his saints, *
for those who fear him lack nothing.
The young lions lack and suffer hunger, *
but those who seek the LORD lack nothing that is good.
Come, children, and listen to me; *
I will teach you the fear of the LORD.
Who among you loves life *
and desires long life to enjoy prosperity?
Keep your tongue from evil-speaking *
and your lips from lying words.
Turn from evil and do good; *
seek peace and pursue it.
The eyes of the LORD are upon the righteous, *
and his ears are open to their cry.
The face of the LORD is against those who do evil, *
to root out the remembrance of them from the earth.
The righteous cry, and the LORD hears them *
and delivers them from all their troubles.
The LORD is near to the brokenhearted *
and will save those whose spirits are crushed.
Many are the troubles of the righteous, *
but the LORD will deliver him out of them all.
He will keep safe all his bones; *
not one of them shall be broken.
Evil shall slay the wicked, *
and those who hate the righteous will be punished.
The LORD ransoms the life of his servants, *
and none will be punished who trust in him. 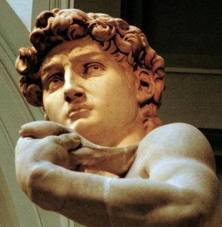 The superscription for this psalm is missing in the liturgical texts, and to review it might give us an opportunity to fully understand the psalmist’s intent here.  The superscription reads: “For David, when he altered his good sense before Abimelech, who banished him, and he went away.”  Surrounded by the Philistine King Achish (the editor of the poem has mistakenly placed Abimelech in the role) and his troops (see I Samuel 21:14), David feigns madness and is sent away (banished) by Achish.  From this particular vantage point, the author contrasts the “righteous man” from “the wicked”.  In the final verses, (19-23) as well as in the initial 9 verses we begin to see what moved the authors of the lectionary to include this as the psalm for this feast day.  Not unlike Luke, the psalmist raises up the concerns of “the broken-hearted”.  As we read Luke’s poem, but into Mary’s mouth at the visitation, The Magnificat has a similar stance and understanding.  David’s humility leads to his salvation, but the psalmist and Mary understand that it is God who does the raising up.
Breaking open Psalm 34
Galatians 4:4-7
When the fullness of time had come, God sent his Son, born of a woman, born under the law, in order to redeem those who were under the law, so that we might receive adoption as children. And because you are children, God has sent the Spirit of his Son into our hearts, crying, "Abba! Father!" So you are no longer a slave but a child, and if a child then also an heir, through God. 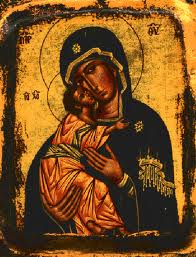 Here Paul unpacks his theology of the Christ, as he presents to us the divine/human being (born of a woman, born under the law) who becomes the first cause of our own adoption as God’s own.  What accrues to us under this status as God’s children is the right to call God “Abba – Father”, and a freedom that comes to us as heirs.  That it is read on this day gives special attention to the phrase, “born of a woman.”  Mary’s gift is that her son is truly one of us, and that he serves as a model of our own relationship with God.  Paul hints at an (almost) new creation, with the Spirit (also a gift of Jesus) witnessing in our hearts that we have become something fundamentally different.  This is family talk, with God as Father, and Jesus as the son, and we as both sons and daughters of God.  Mary’s servitude and willingness also serves as a model of what our lives must be like following the adoption that makes us heirs.
Breaking open Galatians:
St. Luke 1:46-55
Mary said,
"My soul magnifies the Lord,
and my spirit rejoices in God my Savior,
for he has looked with favor on the lowliness of his servant.
Surely, from now on all generations will call me blessed;
for the Mighty One has done great things for me,
and holy is his name.
His mercy is for those who fear him
from generation to generation.
He has shown strength with his arm;
he has scattered the proud in the thoughts of their hearts.
He has brought down the powerful from their thrones,
and lifted up the lowly;
he has filled the hungry with good things,
and sent the rich away empty.
He has helped his servant Israel,
in remembrance of his mercy,
according to the promise he made to our ancestors,
to Abraham and to his descendants forever."
In this piece of poetry, assembled from many other biblical sources, and loosely based on the Song of Hannah (I Samuel 2:1-10) Luke sets up his agenda.  His advocacy for the anawim (the poor) is seen in the verses that he assigns to Mary, and that we visits again in his version of the Sermon on the Mount.  Both the poor and the rich have their day in these verses, each with consequences similar to those that Mary raises in her hymn.  The other image that flows from these verses is that of her willing servitude in the “fullness of time” as Paul says in the second lesson.  If Mary basks in any glory, it is the reflected light of the work of Jesus, her child.  Such servitude on the part of God (He has…lifted up the lowly) informs her service as well, and the service of all who follow her son.  In this manner she becomes a prime example, like Abraham, of faith and righteousness.  She serves as the connecting point, the mother of the new Israel.  Blessed is she among women.

Breaking open the Gospel:
After breaking open the Word, you might want to pray the Collect for this feast day:
O God, you have taken to yourself the blessed Virgin Mary, mother of your incarnate Son: Grant that we, who have been redeemed by his blood, may share with her the glory of your eternal kingdom; through Jesus Christ our Lord, who lives and reigns with you, in the unity of the Holy Spirit, one God, now and for ever. Amen.