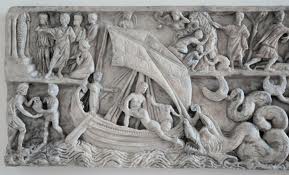 Background:  Old Testament Parables
The form of a parable is not only found in the Gospels of the New Testament, but is also in evidence in the Hebrew Scriptures as well.  Five are especially noted: 1) the neighbor’s lamb expropriated by a neighbor (II Samuel 12:1-4), used to confront David after his sexual exploitation of Bathsheba.  2) The wise woman of Tekamah (I Samuel 14:6-8) who convinces David to come to terms with his treasonous son, Absalom. 3) The prophet who cautions King Ahab about his decisions (I Kings 20:39-40). 4) The vineyard which despite its owners care, languishes, a parable against the behavior of Israel (Isaiah 5:1-6). 5) The efficient farmer (Isaiah 28:24-28, an example of God’s care and providence.  There are many more such parables in the Talmud  (a recording of rabbinic discussions about the Law, Jewish Ethics, and Casuistry) and in the Midrash (biblical interpretation and exegesis), along with several parables connected to the Legends of the Prophets.
The standard first reading for today is from the book of Jonah, which uses the closing segment as the reading.  This book might as a whole be seen as a collection of parables, as well. There are several parabolic segments: a call, flight from God’s call, the great fish, the psalm of deliverance, the mission to Nineveh, and the results of Jonah’s mission activity.  Discussions about the historicity of these events detracts from their sermon-like quality, for the message is not about the wonder of the events, but the quality of God’s word in Jonah’s mission.  These symbols become quite plain and intelligible when viewed in this light.
Exodus 16:2-15
The whole congregation of the Israelites complained against Moses and Aaron in the wilderness. The Israelites said to them, "If only we had died by the hand of the LORD in the land of Egypt, when we sat by the fleshpots and ate our fill of bread; for you have brought us out into this wilderness to kill this whole assembly with hunger."
Then the LORD said to Moses, "I am going to rain bread from heaven for you, and each day the people shall go out and gather enough for that day. In that way I will test them, whether they will follow my instruction or not. On the sixth day, when they prepare what they bring in, it will be twice as much as they gather on other days." So Moses and Aaron said to all the Israelites, "In the evening you shall know that it was the LORD who brought you out of the land of Egypt, and in the morning you shall see the glory of the LORD, because he has heard your complaining against the LORD. For what are we, that you complain against us?" And Moses said, "When the LORD gives you meat to eat in the evening and your fill of bread in the morning, because the LORD has heard the complaining that you utter against him-- what are we? Your complaining is not against us but against the LORD."
Then Moses said to Aaron, "Say to the whole congregation of the Israelites, `Draw near to the LORD, for he has heard your complaining.'" And as Aaron spoke to the whole congregation of the Israelites, they looked toward the wilderness, and the glory of the LORD appeared in the cloud. The LORD spoke to Moses and said, "I have heard the complaining of the Israelites; say to them, `At twilight you shall eat meat, and in the morning you shall have your fill of bread; then you shall know that I am the LORD your God.'"
In the evening quails came up and covered the camp; and in the morning there was a layer of dew around the camp. When the layer of dew lifted, there on the surface of the wilderness was a fine flaky substance, as fine as frost on the ground. When the Israelites saw it, they said to one another, "What is it?" For they did not know what it was. Moses said to them, "It is the bread that the LORD has given you to eat." 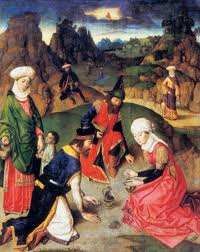 In this reading we see an example of what we discussed in last week’s commentary, namely the “murmuring” pattern in Exodus, specifically the wanderings in the wilderness.  Here we have a murmur; “…you have brought us out into this wilderness to kill those whole assembly with hunger.”  God quickly meets their complaint with two varieties of help.  The first is “manna”, the leavings of a scale insect that infects the tamarisk plants that are common here.  The secretions drop to the desert floor, and cooled by the night air; they can be picked up and collected.  The rules, which God announces are a way of testing the people, were really quite practical since the secretions melt at a heat above 70º.  Thus they needed to be both collected and consumed in the moment.
There is another offering by God, a sudden appearance of Quail.  Quail appear on the Sinai Peninsula in either the fall (when they fly south to Africa from Scandinavia), and in the early summer when they return.  Often, because of their flight over open water, then land in this region quite exhausted and are easily gathered.  The manna and the quail each represent a separate tradition that is preserved here.  St. John finds in the manna a “type of the Eucharist”, the bread from heaven.
Breaking open Exodus:
Psalm 105:1-6, 37-45 Confitemini Domino
Give thanks to the LORD and call upon his Name; *
make known his deeds among the peoples.
Sing to him, sing praises to him, *
and speak of all his marvelous works.
Glory in his holy Name; *
let the hearts of those who seek the LORD rejoice.
Search for the LORD and his strength; *
continually seek his face.
Remember the marvels he has done, *
his wonders and the judgments of his mouth,
O offspring of Abraham his servant, *
O children of Jacob his chosen.
He led out his people with silver and gold; *
in all their tribes there was not one that stumbled.
Egypt was glad of their going, *
because they were afraid of them.
He spread out a cloud for a covering *
and a fire to give light in the night season.
They asked, and quails appeared, *
and he satisfied them with bread from heaven.
He opened the rock, and water flowed, *
so the river ran in the dry places.
For God remembered his holy word *
and Abraham his servant.
So he led forth his people with gladness, *
his chosen with shouts of joy.
He gave his people the lands of the nations, *
and they took the fruit of others' toil,
That they might keep his statutes *
and observe his laws.
Hallelujah!
Here we have a historical psalm which gives thanks for God’s deeds associated with the Exodus from Egypt.  Today’s reading includes the introduction (v. 1-5) and a verse about the patriarch Abraham (v. 6).  The final verses (37-43) recount the exodus and the cloud, and specifically mention the quail, and other wonders; and verses 44-45 recount the offer of land, and the covenant.  The reading is used here to connect with the subject matter of the first reading.
Breaking open Psalm 105
Or
Jonah 3:10-4:11
When God saw what the people of Nineveh did, how they turned from their evil ways, God changed his mind about the calamity that he had said he would bring upon them; and he did not do it.
But this was very displeasing to Jonah, and he became angry. He prayed to the LORD and said, "O LORD! Is not this what I said while I was still in my own country? That is why I fled to Tarshish at the beginning; for I knew that you are a gracious God and merciful, slow to anger, and abounding in steadfast love, and ready to relent from punishing. And now, O LORD, please take my life from me, for it is better for me to die than to live." And the LORD said, "Is it right for you to be angry?" Then Jonah went out of the city and sat down east of the city, and made a booth for himself there. He sat under it in the shade, waiting to see what would become of the city.
The LORD God appointed a bush, and made it come up over Jonah, to give shade over his head, to save him from his discomfort; so Jonah was very happy about the bush. But when dawn came up the next day, God appointed a worm that attacked the bush, so that it withered. When the sun rose, God prepared a sultry east wind, and the sun beat down on the head of Jonah so that he was faint and asked that he might die. He said, "It is better for me to die than to live."
But God said to Jonah, "Is it right for you to be angry about the bush?" And he said, "Yes, angry enough to die." Then the LORD said, "You are concerned about the bush, for which you did not labor and which you did not grow; it came into being in a night and perished in a night. And should I not be concerned about Nineveh, that great city, in which there are more than a hundred and twenty thousand persons who do not know their right hand from their left, and also many animals?" 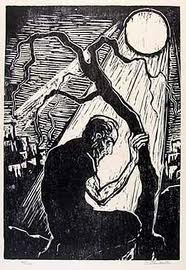