The Fourth Sunday after The Epiphany - 29 January 2012 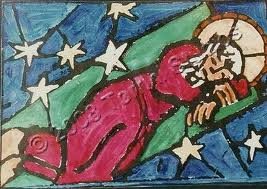 Background: The Sabbath
The Sabbath is an institution that not only influences Jewish life and spirituality but Christian practice as well.  Like a lot of Jewish piety, the Sabbath seems either to have roots in Babylonian practice, or to have influenced the same.  In the sixth century, the Babylonians celebrated days of prohibition on the 7th, 14th, 21st, and 28th.  Various activities were prohibited on these days, similar to the prohibitions of the Sabbath.  In Judaism there is the weekly observance of a Sabbath, guided by the lunar calendar, which also prohibited many activities as well. The day began at sundown, and concluded at the rising of three stars on Saturday evening.  The first creation story (Genesis 1:1-2:4) serves as the theological foundation for this day, recounting how God rested from the labors of creation on the seventh day.  In the remainder of the Pentateuch (the so-called Five Books of Moses) there are several commands about the Sabbath, and the labors or acts that are to be avoided on those days.  Even the Christian calendar is governed by this timing, with the Eve (such as Christmas Eve) beginning the actual day of celebration.  Thus evensong will anticipate the day following.
Deuteronomy 18:15-20
Moses said, The LORD your God will raise up for you a prophet like me from among your own people; you shall heed such a prophet. This is what you requested of the LORD your God at Horeb on the day of the assembly when you said: "If I hear the voice of the LORD my God any more, or ever again see this great fire, I will die." Then the LORD replied to me: "They are right in what they have said. I will raise up for them a prophet like you from among their own people; I will put my words in the mouth of the prophet, who shall speak to them everything that I command. Anyone who does not heed the words that the prophet shall speak in my name, I myself will hold accountable. But any prophet who speaks in the name of other gods, or who presumes to speak in my name a word that I have not commanded the prophet to speak-- that prophet shall die." 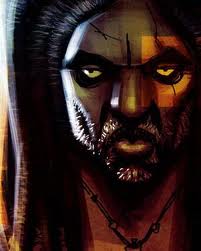 These verses form the conclusion of the Deuteronomist’s argument about prophecy and authority in Israel and amongst her neighbors, as well.  The neighbors largely practiced a “nature” religion in which it was incumbent upon the faithful to control nature (its fertility, and the gifts of the earth) by seeking to persuade the deity to these ends.  Israel was different.  The object of religious life was to know God’s word – and thus God’s desire for the faithful.  In such a context the role of the prophets was one of pronouncement rather than discernment.  Moses is seen as the first of the prophets, and in these verses he lays out what the office of a prophet should be.  He also lays out what is not the prophet’s office, and in doing that sets aside those that followed (and spoke for) foreign gods.
Breaking open Deuteronomy:
Psalm 111 Confitebor tibi
Hallelujah!
I will give thanks to the LORD with my whole heart, *
in the assembly of the upright, in the congregation.
Great are the deeds of the LORD! *
they are studied by all who delight in them.
His work is full of majesty and splendor, *
and his righteousness endures for ever.
He makes his marvelous works to be remembered; *
the LORD is gracious and full of compassion.
He gives food to those who fear him; *
he is ever mindful of his covenant.
He has shown his people the power of his works *
in giving them the lands of the nations.
The works of his hands are faithfulness and justice; *
all his commandments are sure.
They stand fast for ever and ever, *
because they are done in truth and equity.
He sent redemption to his people;
he commanded his covenant for ever; *
holy and awesome is his Name.
The fear of the LORD is the beginning of wisdom; *
those who act accordingly have a good understanding;
his praise endures for ever. 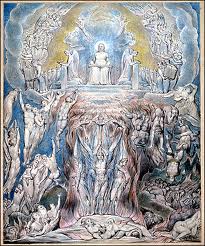 Often called a Thanksgiving Psalm this is actually a Psalm of Praise.  The author is not thanking God for particular acts, but rather pointing out the attributes of the God of Israel.  It is an acrostic psalm in which the beginning of each verset begins with a new letter of the Hebrew alphabet.  It follows well on the first reading in which the prophet is praise for announcing God’s goodness and authority.
Breaking open Psalm 111
1 Corinthians 8:1-13
Now concerning food sacrificed to idols: we know that "all of us possess knowledge." Knowledge puffs up, but love builds up. Anyone who claims to know something does not yet have the necessary knowledge; but anyone who loves God is known by him.
Hence, as to the eating of food offered to idols, we know that "no idol in the world really exists," and that "there is no God but one." Indeed, even though there may be so-called gods in heaven or on earth-- as in fact there are many gods and many lords-- yet for us there is one God, the Father, from whom are all things and for whom we exist, and one Lord, Jesus Christ, through whom are all things and through whom we exist.
It is not everyone, however, who has this knowledge. Since some have become so accustomed to idols until now, they still think of the food they eat as food offered to an idol; and their conscience, being weak, is defiled. "Food will not bring us close to God." We are no worse off if we do not eat, and no better off if we do. But take care that this liberty of yours does not somehow become a stumbling block to the weak. For if others see you, who possess knowledge, eating in the temple of an idol, might they not, since their conscience is weak, be encouraged to the point of eating food sacrificed to idols? So by your knowledge those weak believers for whom Christ died are destroyed. But when you thus sin against members of your family, and wound their conscience when it is weak, you sin against Christ. Therefore, if food is a cause of their falling, I will never eat meat, so that I may not cause one of them to fall. 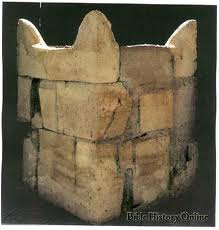 In order to understand Paul’s argument here, we need to understand the fine points about animal sacrifice in the ancient world.  It is commonly thought of that the sacrifice was of the whole animal (called a holocaust), which was not always true.  Usually only the intestines and the inner organs of the animal were sacrificed, with the meaty parts either being given to the temple priesthood, or some of the parts being used by the family in a communal meal, thus the problem for the Corinthians.  Was it proper, they wondered, to eat the flesh of animals sacrificed at the temple of a pagan god?  Either due to social concerns (being invited to such a communal meal by pagan friends) or economic concerns (buying such meat at the market for a cheaper price) the Corinthian Christians were troubled by this.  The argument that follows is not concerned with the practicum of daily Christian life, but rather how to use our knowledge of God.  Paul is concerned with two types of knowledge: that which knows God as the one true God, and the other is of the how this knowledge informs us in our Christian liberty.  What shall we do then, eat meat offered to idols in full knowledge of our liberty in Christ, or abstain, so as not to offend our brother or sister new to the faith.  Paul would rather abstain.
Breaking open Corinthians:
St. Mark 1:21-28
Jesus and his disciples went to Capernaum; and when the Sabbath came, he entered the synagogue and taught. They were astounded at his teaching, for he taught them as one having authority, and not as the scribes. Just then there was in their synagogue a man with an unclean spirit, and he cried out, "What have you to do with us, Jesus of Nazareth? Have you come to destroy us? I know who you are, the Holy One of God." But Jesus rebuked him, saying, "Be silent, and come out of him!" And the unclean spirit, convulsing him and crying with a loud voice, came out of him. They were all amazed, and they kept on asking one another, "What is this? A new teaching-- with authority! He commands even the unclean spirits, and they obey him." At once his fame began to spread throughout the surrounding region of Galilee. 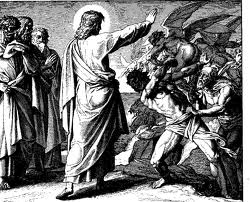 This reading and those following serve as Mark’s introduction of the reader to the authority of Jesus.  In the initial verses, Mark depicts Jesus as one having rabbinic (binding) authority in opposition to the scribes (a lesser teacher who did not have this authority).  Mark, however, takes it even father by providing evidence from the ministry of Jesus.  In the first miracle in Mark, Jesus is shown as having authority (suasion) over evil itself.  A sick man (described as being possessed by an evil spirit – that knows Jesus role and authority) challenges Jesus.  He speaks Jesus’ name twice in the reading – for knowledge of one’s name amounted to a certain amount of “magical” power over another.  The crowd does not know who Jesus is – so his act of exorcism and the proclamation by the evil spirit – ascertain Jesus’ authority to the Christian reader.
Breaking open the Gospel:
After breaking open the Word, you might want to pray the Collect for Sunday:
Almighty and everlasting God, you govern all things both in heaven and on earth: Mercifully hear the supplications of your people, and in our time grant us your peace; through Jesus Christ our Lord, who lives and reigns with you and the Holy Spirit, one God, for ever and ever. Amen.