Background:  Creation – Word and Chaos
In the readings from Job and from the Gospel of Mark, we have echoes of one of the creation stories in Genesis.  It is one model that is used in describing the work of creation, but it is not the only one.  The influences on the creation stories flow directly from the Canaanite culture that surrounded Israel, and somewhat more indirectly from the Mesopotamian culture that was the background to the great patriarchal epics.  Both of the models are indebted to these cultural streams.  One is the “Word” model, in which God speaks, and something is accomplished.  The other is a “Crisis” or “Chaos” model in which God as creator overcomes forces of disorder.  Some commentators speak of the Word model, as being “dry” and of the Chaos model as being “wet”.  The chaos is wet in that the forces of disarray that are conquered in creation are seen in the unruly sea, and the monsters (the Leviathan) that live there.  The reading from Job refers to the chaos model when YHWH says to Job, “Or who shut in the sea with doors?”  Likewise, in the Gospel, we have a reflection of the creation story when Jesus controls the chaos of wind and wave.  Such are the rich cultural backgrounds to our sacred texts.

Job 38:1-11
Then the LORD answered Job out of the whirlwind:

"Who is this that darkens counsel by words without knowledge?  Gird up your loins like a man,  I will question you, and you shall declare to me.  "Where were you when I laid the foundation of the earth?  Tell me, if you have understanding.  Who determined its measurements-- surely you know!  Or who stretched the line upon it?  On what were its bases sunk,  or who laid its cornerstone  when the morning stars sang together  and all the heavenly beings shouted for joy?     "Or who shut in the sea with doors  when it burst out from the womb? --  When I made the clouds its garment,  and thick darkness its swaddling band,  and prescribed bounds for it,  and set bars and doors,  and said, `Thus far shall you come, and no farther,  and here shall your proud waves be stopped'? 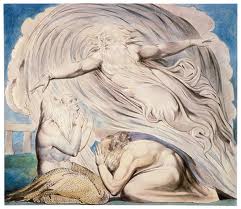 In the conversations that Job is having with his erstwhile friends about his difficulties and his sorrow, God intervenes to put Job gently back into his place.  This reminder comes in a theophany, a divine appearance from the midst of a whirlwind (again God rules over the chaos), and the divine name, YHWH, is used.  God wants Job to see that it is God that is control of nature, and does so in a series of questions to Job: “Who?” “What?” “How?”.  The common answer is “I”, God the creator.  The purpose of this reading is not to lead the worshipper in the liturgy to the intricate conversations of Job, but rather to see God, in the Book of Job, as the cause of creation.  Thus, Jesus is lifted up in the Gospel in a similar manner.

Give thanks to the LORD, for he is good, *
and his mercy endures for ever.

Let all those whom the LORD has redeemed proclaim *
that he redeemed them from the hand of the foe.

Some went down to the sea in ships *
and plied their trade in deep waters;

They beheld the works of the LORD *
and his wonders in the deep.

Then he spoke, and a stormy wind arose, *
which tossed high the waves of the sea.

They mounted up to the heavens and fell back to the depths; *
their hearts melted because of their peril.

They reeled and staggered like drunkards *
and were at their wits' end.

Then they cried to the LORD in their trouble,
and he delivered them from their distress.

He stilled the storm to a whisper *
and quieted the waves of the sea.

Then were they glad because of the calm, *
and he brought them to the harbor they were bound for.

Let them give thanks to the LORD for his mercy *
and the wonders he does for his children. 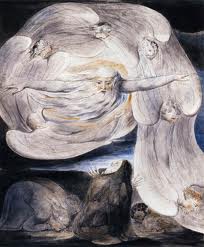 This is a collective thanksgiving psalm, which becomes clear to us as we see all the levels of gratefulness that the author unfolds for us in the psalm.  In verse two we need to understand the use of the term “redeemed” there.  This is used here not in its religious sense but rather in its political sense.  The “redeemed ones” are hostages that have been released from some sort of political captivity.  The following verse offers a possible context.  Gathered from “out of the lands” might be a reference to the Babylonian Exile.  It might be, however, that this is an older text, and the reference may have been the return from Egypt.

Into the psalm, which celebrates the return of the exile, we have the inclusion of material that may have originally been from another, unrelated source.  Ancient manuscripts note verses 23-30 with a mark that sets them apart.  This section on the seafarer may serve as a commentary on God’s saving help at the time of death, the sea often serving as an image of death in the Hebrew Scriptures.  For our purposes, this morning, these verses have been chosen to amplify the Gospel reading, with Jesus on the Sea of Galilee.

2 Corinthians 6:1-13
As we work together with Christ, we urge you also not to accept the grace of God in vain. For he says,

"At an acceptable time I have listened to you,
and on a day of salvation I have helped you."

See, now is the acceptable time; see, now is the day of salvation! We are putting no obstacle in anyone's way, so that no fault may be found with our ministry, but as servants of God we have commended ourselves in every way: through great endurance, in afflictions, hardships, calamities, beatings, imprisonments, riots, labors, sleepless nights, hunger; by purity, knowledge, patience, kindness, holiness of spirit, genuine love, truthful speech, and the power of God; with the weapons of righteousness for the right hand and for the left; in honor and dishonor, in ill repute and good repute. We are treated as impostors, and yet are true; as unknown, and yet are well known; as dying, and see-- we are alive; as punished, and yet not killed; as sorrowful, yet always rejoicing; as poor, yet making many rich; as having nothing, and yet possessing everything.
We have spoken frankly to you Corinthians; our heart is wide open to you. There is no restriction in our affections, but only in yours. In return-- I speak as to children-- open wide your hearts also. 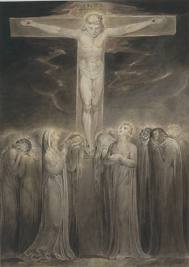 What we have here is an invitation for mutual love and respect – Paul for the Corinthians, and the Corinthians for Paul.  The opening line, with its sub note of cooperation (which is more than cooperation between two entities – Paul and the Corinthians, but rather cooperation with God) also notes through a quotation from Isaiah 49:8, that this work with God is done in a time of God’s good favor – the “acceptable time.”  Paul follows with the usual lists of virtues, and contrasting qualities.  It is as if Paul is opening himself up to the people of Corinth so that they might see his motivation and his intent in ministering to them.  One note, the right hand was used for weapons of offense, while the left hand for weapons of defense.  The type of weapon, righteousness, is called for in both situations, as a response to the enemies of the faith, and as a defense against them as well.

Mark 4:35-41
When evening had come, Jesus said to his disciples, "Let us go across to the other side." And leaving the crowd behind, they took him with them in the boat, just as he was. Other boats were with him. A great windstorm arose, and the waves beat into the boat, so that the boat was already being swamped. But he was in the stern, asleep on the cushion; and they woke him up and said to him, "Teacher, do you not care that we are perishing?" He woke up and rebuked the wind, and said to the sea, "Peace! Be still!" Then the wind ceased, and there was a dead calm. He said to them, "Why are you afraid? Have you still no faith?" And they were filled with great awe and said to one another, "Who then is this, that even the wind and the sea obey him?" 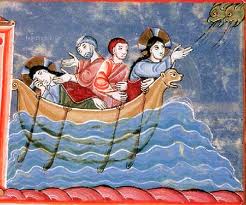 Following the parables of the seed and the mustard seed, Mark gives us three miracles: the stilling of the storm, the Gerasene demoniac, and Jairus’ daughter.  This morning’s reading is the first in this series.  The pericope, however, stands by itself, originally a remembrance of Peter that is morphed into a creedal statement, and an image of the Church (the boat).  Some scholars see the original story as consisting of four points of belief: a) A great windstorm arose (threat), b) And Jesus was in the stern asleep (further threat), c) Jesus awakens and rebukes the wind (salvation and revelation of true character), and d) The disciples are filled with awe (faith).  What is the purpose of the story?  Perhaps it is to give a lesson about how to follow Jesus in times of stress and difficulty.  The question posed by the disciples, “Who then is this…?” needs no answer, for the reader supplies the answer of faith and trust in the claims about Jesus as the Christ.

O Lord, make us have perpetual love and reverence for your holy Name, for you never fail to help and govern those whom you have set upon the sure foundation of your loving-kindness; through Jesus Christ our Lord, who lives and reigns with you and the Holy Spirit, one God, for ever and ever. Amen.