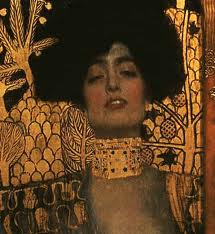 The prophet Elijah enters the scene in the Northern Kingdom of Israel at a challenging time, although fine grist for the prophetic mill.  With the dissolution of the Davidic union of both the kingdoms of Judah (South) and Israel (North), the northern kingdom attempts to distance itself from the Jerusalem-centric designs of both David and Solomon.  New cult centers are established in the north, discouraging people from their pilgrimages to Jerusalem and the south.  In addition there is an over-whelming influence of Canaanite culture on the life and religion of the north as well.  The Ba’alim (literally, “the Lords”, Ba’al is a title, not a name) of the Canaanites are reintroduced into Israelite life.  In addition it is a time of prosperity.  Into this mix Elijah begins his ministry against the prevailing culture, issuing a call to return to YHWH, the God of Israel.  His ministry is largely during the reign of Ahab (ca. 869-853 BCE) who with his Phoenician wife, Jezebel, becomes the target for the prophet’s ire.  The cross-purposes can be seen in the antagonists’ names: Jezebel, “the lord (Ba’al) exalts” and Elijah, “Jah (YHWH) is my God.”

Elijah went a day's journey into the wilderness, and came and sat down under a solitary broom tree. He asked that he might die: "It is enough; now, O LORD, take away my life, for I am no better than my ancestors." Then he lay down under the broom tree and fell asleep. Suddenly an angel touched him and said to him, "Get up and eat." He looked, and there at his head was a cake baked on hot stones, and a jar of water. He ate and drank, and lay down again. The angel of the LORD came a second time, touched him, and said, "Get up and eat, otherwise the journey will be too much for you." He got up, and ate and drank; then he went in the strength of that food forty days and forty nights to Horeb the mount of God. 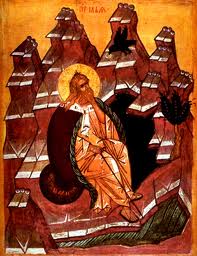 These verses are preceded by a confrontation of the prophet with the priests of the Ba’alim (see Background above).  The victory that Elijah experience is quickly brought to naught by the actions of Jezebel, Ahab’s queen.  She telegraphs her intent to do him bodily harm, and Elijah responds by fleeing to Horeb (also named as Sinai) (here the story begins to parallel the life of Moses).  He journeys for a day, and has an experience with an angel who provides for him.  In some respects his journey is a reflection of the 40-year journey of Israel in the wilderness – Elijah’s journey to Horeb (Sinai) takes 40 days, more than is needed.  The numbers here signal to us that this is ritual journey that takes Elijah to place where the Law was given, and where God revealed God’s self to Moses.  The Deuteronomist who is responsible for these texts is signaling to us that Elijah is a new Moses calling his people back to their traditions and history.  The reading’s relevance to the other readings for the day lies in the provision of bread for Elijah’s hunger (see the Gospel for today). 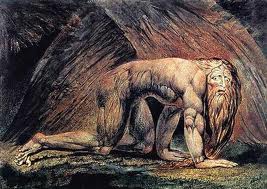 This psalm enjoys an unusual introduction that does not appear as a header to the psalm in the BCP.  The psalm is described as “for David, when he altered his good sense before Abimelech who banished him, and he went away.”  The scene which can be read in I Samuel 21:14, finds David surrounded by his Philistine enemies at the city of Gath.  In order to evade them, David plays the madman (“he altered his good sense”), and thus avoids a confrontation with the king (not Abimelech, an error by the psalm’s author, but rather Achish). The opening verses, then in this context, are quite rich, with the author, as David’s vicar, asking for God’s intervention and strength.  The psalm is an acrostic with only the letter waw missing.  The closing lines, which are not included in today’s psalm, are quite evocative of the original theme, “The Lord ransoms his servant’s lives.”

Putting away falsehood let all of us speak the truth to our neighbors, for we are members of one another. Be angry but do not sin; do not let the sun go down on your anger, and do not make room for the devil. Thieves must give up stealing; rather let them labor and work honestly with their own hands, so as to have something to share with the needy. Let no evil talk come out of your mouths, but only what is useful for building up, as there is need, so that your words may give grace to those who hear. And do not grieve the Holy Spirit of God, with which you were marked with a seal for the day of redemption. Put away from you all bitterness and wrath and anger and wrangling and slander, together with all malice, and be kind to one another, tenderhearted, forgiving one another, as God in Christ has forgiven you. Therefore be imitators of God, as beloved children, and live in love, as Christ loved us and gave himself up for us, a fragrant offering and sacrifice to God. 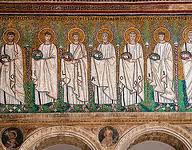 We continue with our readings from Ephesians.  In this pericope we read Paul’s “Principles for Spiritual Renewal”.  In addition to the focus that Christians need to have on the risen Lord, Paul argues that there must also be a focus on the Christian brother and sister, “let us speak the truth to our neighbors”.  In an expanded list, Paul notes the virtues that are to be taken up by the Christian: honesty, forgiveness, honest labor and sharing, honest speech.  Woven into this list are a list of vices: stealing, bitterness, wrath, slander, etc.  In the reference to “beloved children” Paul is not noting our status before God, but rather the desire that we “imitate” the Father who cares for us.

Then the Jews began to complain about him because he said, "I am the bread that came down from heaven." They were saying, "Is not this Jesus, the son of Joseph, whose father and mother we know? How can he now say, `I have come down from heaven'?" Jesus answered them, "Do not complain among yourselves. No one can come to me unless drawn by the Father who sent me; and I will raise that person up on the last day. It is written in the prophets, `And they shall all be taught by God.' Everyone who has heard and learned from the Father comes to me. Not that anyone has seen the Father except the one who is from God; he has seen the Father. Very truly, I tell you, whoever believes has eternal life. I am the bread of life. Your ancestors ate the manna in the wilderness, and they died. This is the bread that comes down from heaven, so that one may eat of it and not die. I am the living bread that came down from heaven. Whoever eats of this bread will live forever; and the bread that I will give for the life of the world is my flesh." 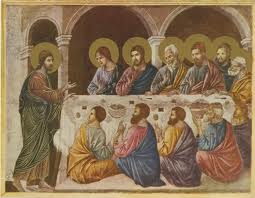 The first verse of the lectionary pericope reintroduces us to the theme that we have been following for the last two Sundays, “I am the bread of life.”  Following this proclamation there is an example of familiarity breeding contempt.  The hearers do not see the Bread of Life – they only see the son of Mary and Joseph, a local boy with pretensions.  Jesus ignores their asides and attempts to redirect their attention to the graces of God that accompany his claim to be “the Bread of Life.”  Jesus positions himself as a translator in fact.  The promise is that God will teach and all will understand, however, here Jesus is the teacher, the bearer of grace.  Jesus reminds them of their own history – the story of the manna in the wilderness.  In spite of God’s gift and grace, they died.  The bread that Jesus is gives life, not just quotidian life.  The final verse strikes John’s Eucharistic note with its connection of flesh and bread.

Grant to us, Lord, we pray, the spirit to think and do always those things that are right, that we, who cannot exist without you, may by you be enabled to live according to your will; through Jesus Christ our Lord, who lives and reigns with you and the Holy Spirit, one God, for ever and ever. Amen.