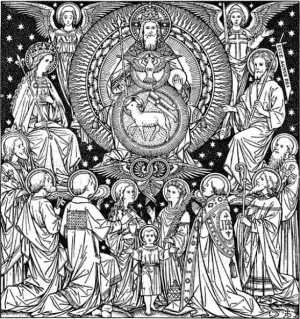 Background: All Saints Day
the origin of this day is a bit murky, perhaps originating in the Eastern Church, where it was observed in May, or the Sunday after Pentecost.  In 609, Pope Boniface IV dedicated the Pantheon in Rome to the Virgin Mary and all the Martyrs.  In the eighth century celebrations of all the Saints emerged in England, celebrated principally on 1 November, which was brought to England either through the ministry of Egbert of York, or perhaps from earlier celebrations either in Ireland or Gaul.  It is a day in which the Church celebrates saints living and departed, a representation of the totality of the Body of Christ.  The present celebration in the Book of Common Prayer is classed as a Principal Feast, one of seven.  It is also a date on which is recommended the administration of Holy Baptism.

Isaiah 25:6-9
On this mountain the LORD of hosts will make for all peoples
a feast of rich food, a feast of well-aged wines,
of rich food filled with marrow, of well-aged wines strained clear.
And he will destroy on this mountain
the shroud that is cast over all peoples,
the sheet that is spread over all nations;
he will swallow up death forever.
Then the Lord GOD will wipe away the tears from all faces,
and the disgrace of his people he will take away from all the earth,
for the LORD has spoken.
It will be said on that day,
Lo, this is our God; we have waited for him, so that he might save us.
This is the LORD for whom we have waited;
let us be glad and rejoice in his salvation.

In this hymn of thanksgiving, the first Isaiah anticipates a great victory on the part of YHWH.  It falls in the midst of oracles against the cultures and nations that are seen as hostile to Israel.  The vision is one of a messianic banquet that is not limited to the people of Israel, but to “all peoples” – a development that moves this prophet’s vision from one that is bounded by nationalism to a much broader perspective.  The notion of the celestial banquet is common to both Israelite and Canaanite culture.

In a way, this oracle or hymn is a completion of the cycle begun in Genesis with the account of the Fall, for here the threat of sin and death and their consequences are vanquished.  That the Christian Scriptures rely so much on Isaiah (both of them) is not surprising, for this note of universalism and salvation represents beginning steps to the theology found in the Gospels.  If we were to plumb the depths of the Eucharistic Meal, its roots would be found in this very vision.

Breaking open Isaiah:
1   How do you imagine heaven?
2   How does Isaiah image heaven?
3   What are the differences?

The earth is the LORD'S and all that is in it, *
the world and all who dwell therein.

For it is he who founded it upon the seas *
and made it firm upon the rivers of the deep.

"Who can ascend the hill of the LORD? *
and who can stand in his holy place?"

"Those who have clean hands and a pure heart, *
who have not pledged themselves to falsehood,
nor sworn by what is a fraud.

They shall receive a blessing from the LORD *
and a just reward from the God of their salvation."

Lift up your heads, O gates;
lift them high, O everlasting doors; *
and the King of glory shall come in.

"Who is this King of glory?" *
"The LORD, strong and mighty,
the LORD, mighty in battle."

Lift up your heads, O gates;
lift them high, O everlasting doors; *
and the King of glory shall come in. 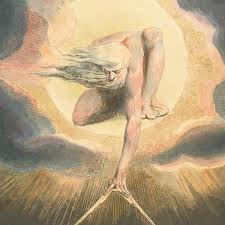 This psalm is interesting in its question/answer format, which explores the beauty of the work of God’s hands.  The second verse, noting the foundation of the world “upon the seas” refers to the Canaanite (and Mesopotamian) beliefs about the primeval battle between the deity and the chaos of the sea.  So in creation, God separates the land from the sea.  Then we are transported to the temple, and the question as to who can rightfully ascend its heights.  The question is answered with a series of qualifications that are represented in the people of God.

Verse seven probably begins a separate work, in which the question posed wishes to identify whom it is that the pilgrims are ascending to worship.  Some commentators think that this work actually was commenting on the return of the Ark of the Covenant from the field of battle (The Lord who is valiant in battle).

Breaking open Psalm 24
1   What allows you to enter God’s holy space?
2   Do the requirements keep anyone out?  Whom might it keep out?
3   How is the Lord “valiant in battle?”  What does this mean?

Revelation 21:1-6a
I saw a new heaven and a new earth; for the first heaven and the first earth had passed away, and the sea was no more. And I saw the holy city, the new Jerusalem, coming down out of heaven from God, prepared as a bride adorned for her husband. And I heard a loud voice from the throne saying,

"See, the home of God is among mortals.
He will dwell with them as their God;
they will be his peoples,
and God himself will be with them;
he will wipe every tear from their eyes.
Death will be no more;
mourning and crying and pain will be no more,
for the first things have passed away."

And the one who was seated on the throne said, "See, I am making all things new." Also he said, "Write this, for these words are trustworthy and true." Then he said to me, "It is done! I am the Alpha and the Omega, the beginning and the end."

Again we are confronted with the foundation of creation, this time in the vision of the Divine.  Here he has a vision of a new creation, a new heaven and a new earth.  That the “sea is no more” is a comment on the ancient myths regarding God’s victory over chaos, represented in the sea itself.  What follows are a series of aspects of the new creation.  There is the new city (a heavenly Jerusalem) and a loud voice proclaiming new realities from the Throne of God.  One of the canons at the Cathedral of Saint John the Divine in New York City opined that the only proper way to read these proclamations, which appear elsewhere in the book, especially in the letters to the churches, was to shout them in a loud voice.  The signs of the proclamation are a reflection of what the first Isaiah wrote in the first reading for the day.  Again, it is a vision as if it had already had been completed.  Thus the one seated on the throne (the Resurrected One) states emphatically, “It is done,” and then encapsulates all of it in his own existence as the “Alpha and the Omega.”

Breaking open Revelation:
1   Is the new creation a future or a present event?
2   What would you like to see renewed in creation?
3   What do you need to have renewed within yourself?

When Mary came where Jesus was and saw him, she knelt at his feet and said to him, "Lord, if you had been here, my brother would not have died." When Jesus saw her weeping, and the Jews who came with her also weeping, he was greatly disturbed in spirit and deeply moved. He said, "Where have you laid him?" They said to him, "Lord, come and see." Jesus began to weep. So the Jews said, "See how he loved him!" But some of them said, "Could not he who opened the eyes of the blind man have kept this man from dying?"

Then Jesus, again greatly disturbed, came to the tomb. It was a cave, and a stone was lying against it. Jesus said, "Take away the stone." Martha, the sister of the dead man, said to him, "Lord, already there is a stench because he has been dead four days." Jesus said to her, "Did I not tell you that if you believed, you would see the glory of God?" So they took away the stone. And Jesus looked upward and said, "Father, I thank you for having heard me. I knew that you always hear me, but I have said this for the sake of the crowd standing here, so that they may believe that you sent me." When he had said this, he cried with a loud voice, "Lazarus, come out!" The dead man came out, his hands and feet bound with strips of cloth, and his face wrapped in a cloth. Jesus said to them, "Unbind him, and let him go."

In Jesus last journey to Jerusalem we see previews of things to come, and the seventh (the number of perfection) sign.  It is the raising of Lazarus, the brother of Mary and Martha.  The term “greatly disturbed” can either be translated as “anger”, “trembling”, or “intense emotion”.  What is clear is that Jesus, as well as the sisters and on-lookers are facing the existential reality of death, and all react to it.  What follows is like a drama, complete with stage directions.  Jesus seems to comment in sotto voce so that the emphasis of the action might be heard, seen, and understood.  What is operating at a different level is the communication of the Father and the Son – knowing the mind of the other.  Thus follows then, another “Loud Voice”, this time the voice of Jesus communicating to the dead Lazarus.  The final comment of Jesus is almost ironic, “Unbind him, and let him go.”  It is a comment on the practical requirements of the situation, and a bit of Gospel proclamation intended for all the witnesses of this sign – a proclamation about their own freedom.

1   Which emotions are visible in this Gospel reading?
2   How does Jesus involve the crowd?
3   What emotions would you assign to Jesus in this story?

Almighty God, you have knit together your elect in one communion and fellowship in the mystical body of your Son Christ our Lord: Give us grace so to follow your blessed saints in all virtuous and godly living, that we may come to those ineffable joys that you have prepared for those who truly love you; through Jesus Christ our Lord, who with you and the Holy Spirit lives and reigns, one God, in glory everlasting. Amen.