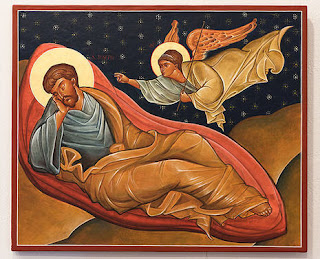 The Annunciation to Joseph which is today’s Gospel prompts me to give some background to Joseph the husband of Mary. He is honored in the calendars of the Orthodox Churches, the Roman Church, Anglicans, and Lutherans. He is the patron saint of workers. He appears in all of the synoptic Gospels excepting Mark, and in John as well. The genealogy of Matthew traces a royal lineage from Solomon. He is present at the nativity, with a final appearance in the Temple during the Passover pilgrimage made by the Holy Family. The annunciation text places Joseph in the tradition of his forebearer, Joseph the dreamer, in Genesis.

Again the Lord spoke to Ahaz, saying, Ask a sign of the Lord your God; let it be deep as Sheol or high as heaven. But Ahaz said, I will not ask, and I will not put the Lord to the test. Then Isaiah said: “Hear then, O house of David! Is it too little for you to weary mortals, that you weary my God also? Therefore the Lord himself will give you a sign. Look, the young woman is with child and shall bear a son, and shall name him Immanuel. He shall eat curds and honey by the time he knows how to refuse the evil and choose the good. For before the child knows how to refuse the evil and choose the good, the land before whose two kings you are in dread will be deserted.” 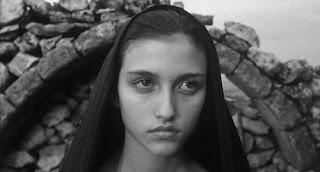 In this chapter of Isaiah, the prophet introduces the idea of messianic hope, along with the notion of the remnant. The words of the oracle are Isaiah’s, but the authority that governs them is from YHWH. It is God who invites them to ask for a sign. In his commentary on Isaiah, Brevard S. Childs notes the significance of sign in prophetic material, “a sign is a special event, either ordinary or miraculous, that serves as a pledge by which to confirm the prophetic word.”[1] The sign we read of in this reading is one with which we are perhaps too familiar. It is important for us to look at it closely again, both in the context of the prophet’s time, and again through our Christian lenses. The birth announcement is similar to ones in Genesis 16:11 and Judges 13:3. It is the word almāh that has caused confusion. The Greek translation of almāh as parthenos (virgin) reflects, perhaps, the understanding of later authors and those quoting Isaiah, but it is not the meaning assigned to the word in Hebrew. In Hebrew the word signifies a woman of sexual maturity, not necessarily a virgin. Another consideration is as to whether this young woman is a particular individual or several individuals – a class of women.  Our Christian lenses might answer that one way, while the reader of the Hebrew Scriptures might see it another way.

The name is the important aspect of the sign – Immanuel. It is a name that is peculiar to this Old Testament text, although there is the same sense in Psalm 46:8 and 12. It is a statement of faith, that even in the most dire of circumstances God is still in the midst of the people, protecting and guiding. Given the oracles that precede and follow this text with this name and promise, this annunciation is crucial for those who awaited a messiah, and those who have seen the Messiah. 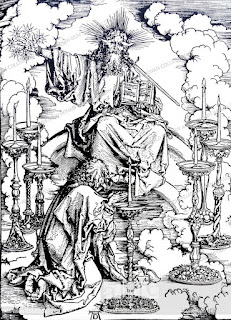 This psalm asks us to look at the God who leads Joseph, i.e. the Northern Kingdom. This is made more clear in the Septuagint where it includes in the superscription the phrase, “concerning the Assyrians”, the enemy that decimated Israel in the eighth century BCE. The mention of Ephraim, Benjamin, and Manasseh, all northern tribes, makes certain that the addressee is the Northern Kingdom. In this prayer there is the tacit admission that God is indeed angered by the people, for God has fed them with the “bread of tears.” The situation between God and people has caused the other nations to mock them, and to hold them in derision. The elided verses (8-15) recall before God the bringing of Israel out of Egypt – God planting a new vine in a new land. The prayer now is “Come again!” Like the text from Isaiah in the first reading we see the promise of a son, “the man of your right hand.” What is suggested here is an agent who will lead the people back to God. The final verse says it well, “Restore us, O Lord God of hosts.”

Paul, a servant of Jesus Christ, called to be an apostle, set apart for the gospel of God, which he promised beforehand through his prophets in the holy scriptures, the gospel concerning his Son, who was descended from David according to the flesh and was declared to be Son of God with power according to the spirit of holiness by resurrection from the dead, Jesus Christ our Lord, through whom we have received grace and apostleship to bring about the obedience of faith among all the Gentiles for the sake of his name, including yourselves who are called to belong to Jesus Christ,

To all God's beloved in Rome, who are called to be saints:
Grace to you and peace from God our Father and the Lord Jesus Christ. 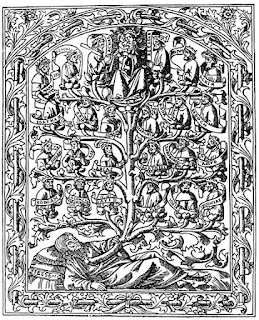 This reading is comprised of Paul’s introduction in his letter to the church at Rome. In phrases that are almost credal, Paul introduces the One to which he is a servant, Jesus Christ. The citing of prophet, and the descent from David, make this a good remembrance in this last Sunday of Advent. But there is more than the nativity and the manger. Paul looks forward to the resurrection, and to the call of the Gentiles to both grace and apostleship. All are called to be saints, and it is these to which Paul introduces himself.

Now the birth of Jesus the Messiah took place in this way. When his mother Mary had been engaged to Joseph, but before they lived together, she was found to be with child from the Holy Spirit. Her husband Joseph, being a righteous man and unwilling to expose her to public disgrace, planned to dismiss her quietly. But just when he had resolved to do this, an angel of the Lord appeared to him in a dream and said, “Joseph, son of David, do not be afraid to take Mary as your wife, for the child conceived in her is from the Holy Spirit. She will bear a son, and you are to name him Jesus, for he will save his people from their sins.” All this took place to fulfill what had been spoken by the Lord through the prophet:

“Look, the virgin shall conceive and bear a son,
and they shall name him Emmanuel,”

which means, “God is with us.” When Joseph awoke from sleep, he did as the angel of the Lord commanded him; he took her as his wife, but had no marital relations with her until she had borne a son; and he named him Jesus. 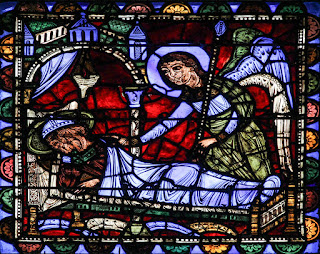 In Matthew the annunciation is to Joseph. You might want to read through the genealogy that immediately precedes this, a remembrance of all the important linkages that Matthew wishes us to see. We are also meant to see the relationship between this woman, Mary, and Joseph her betrothed. Betrothal was the first step of marriage in which a man and a woman consented to become husband and wife. This would constitute a legal marriage, although sharing a household would come later (perhaps up to one year). The conception of Jesus occurs before this second stage of the marriage, before the living together. Joseph is shown to us in his righteousness, in his keeping of the law, and in not wishing to embarrass Mary. Some divine intervention is needed here.

Matthew relies on the Joseph Story (the Joseph of Egypt) in his construct of the Nativity of Jesus. Thus Joseph, the father, is a dreamer just like the Joseph of Egypt. An angel comes to straighten things out. Included in the angelic explanation is a quotation form Isaiah (see the first reading) that links the child with the ancient promise. Joseph is given the name, Jesus, as well, the angel explaining, “for he will save his people from their sins.” Like Mary, Joseph obeys, and after the birth he names him Jesus.

After breaking open the Word, you might want to pray the Collect for Sunday. 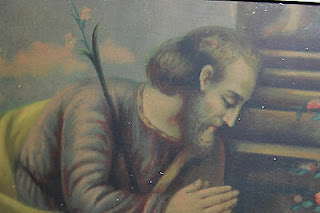 Purify our conscience, Almighty God, by your daily visitation, that your Son Jesus Christ, at his coming, may find in us a mansion prepared for himself; who lives and reigns with you, in the unity of the Holy Spirit, one God, now and for ever. Amen.