The Readings for Christmas Eve

It isn’t until the fourth century that a day celebrating the Nativity of Jesus begins to be celebrated.  The days of such celebrations ranged from March to May to December.  It may be that the celebration of two Roman feasts influenced the selection of 25 December as the day.  The first was the Winter Solstice (21 December), and a related Feast of Sol Invictus (The Feast of the Conquering Son) which celebrated the resurgence of the sun at the Winter Solstice, and was very popular among the Roman military, many of whom were devotes of Mithras.  The development in the west was different than that in the East, where the day chosen was 6 or 7 January, known in the West as The Epiphany (Manifestation) of our Lord.  In the west there developed a whole cycle of events that centered on the birth of Christ.  There was the preparatory season of Advent, the day(s) of the Nativity, and the twelve days that stretched to the Epiphany.  Some thought the season to have lasted until 2 February, when the Church celebrated The Presentation of Our Lord, and the Purification of the Blessed Virgin Mary or Candlemas.  The notion of celebrating the Eve of a feast day comes from the configuration of the Jewish Day, which began at sundown.  Hence the celebration of the Eve is really the first mass of the feast day. 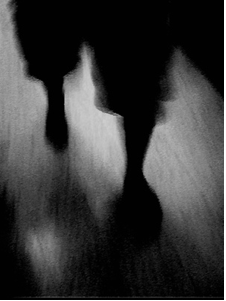 The people who walked in darkness

have seen a great light;

those who lived in a land of deep darkness--

on them light has shined.

You have multiplied the nation,

you have increased its joy;

they rejoice before you

as with joy at the harvest,

as people exult when dividing plunder.

For the yoke of their burden,

and the bar across their shoulders,

the rod of their oppressor,

you have broken as on the day of Midian.

For all the boots of the tramping warriors

and all the garments rolled in blood

shall be burned as fuel for the fire.

For a child has been born for us,

a son given to us;

authority rests upon his shoulders;

and he is named

His authority shall grow continually,

and there shall be endless peace

for the throne of David and his kingdom.

He will establish and uphold it

with justice and with righteousness

from this time onward and forevermore.

The zeal of the LORD of hosts will do this.

This first of the Isaiahs flourished around 740 BCE, and witnessed during the lifetimes of the influential kings, Uzziah, Josiah, and Hezekiah.  He was a prophet of the old school, who delivered difficult and poignant messages to the leaders of his time.  He was probably most influenced by the conquering of the Northern Kingdom of Israel by the Assyrian king Tiglath-Pilesar III (II Kings 15:19), who deported large sections of the population to other areas of his realm, giving rise to the notion of the “lost ten tribes of Israel.”  Seen through this lens we can begin to understand the hopes he writes about in the reading for this evening.  Isaiah looks beyond the threats of the Assyrians to a time when “the people who walked in darkness” (Israel – walking in the threat of Assyria) will walk in light and in hope.  A new anointed one (Messiah) will lead the people, and his names will signal the qualities of his reign – Counselor, Prince of Peace.  The hope is for the continuation of the kings who spring from David’s line – and in Jesus, Christians see that continuation and hope. 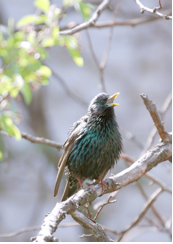 Sing to the LORD and bless his Name; *
proclaim the good news of his salvation from day to day.

Declare his glory among the nations *
and his wonders among all peoples.

For great is the LORD and greatly to be praised; *
he is more to be feared than all gods.

As for all the gods of the nations, they are but idols; *
but it is the LORD who made the heavens.

Oh, the majesty and magnificence of his presence! *
Oh, the power and the splendor of his sanctuary!

Ascribe to the LORD the honor due his Name; *
bring offerings and come into his courts.

Worship the LORD in the beauty of holiness; *
let the whole earth tremble before him.

Tell it out among the nations: "The LORD is King! *
he has made the world so firm that it cannot be moved;
he will judge the peoples with equity."

Then shall all the trees of the wood shout for joy
before the LORD when he comes, *
when he comes to judge the earth.

He will judge the world with righteousness *
and the peoples with his truth.

In the Ancient Near East almost every culture had a “enthronement ceremony” in which the king/god/priest was honored.  Psalm 96 is a variation on that theme, but signals at the very beginning that it is substantially different than the practice of the peoples that surrounded Israel.  The Psalm begins, as does Psalm 98, “Sing to (the Lord) a new song!”.  Psalm 96 sits in a set of four psalms, all of which celebrate the enthronement of “the Lord”, (and here the Hebrew text would have placed the unpronounceable name of God).  This, however, is not just the God of Israel – certain claims are a made, inviting all the nations of the earth to celebrate the “kingship” of God.  Indeed, all of creation is invited to sing the song.

For the grace of God has appeared, bringing salvation to all, training us to renounce impiety and worldly passions, and in the present age to live lives that are self-controlled, upright, and godly, while we wait for the blessed hope and the manifestation of the glory of our great God and Savior, Jesus Christ. He it is who gave himself for us that he might redeem us from all iniquity and purify for himself a people of his own who are zealous for good deeds.

The Epistle of Titus may or may not have been written by Paul.  In general it does not share his vocabulary or literary style; nor does it seem to fit into Paul’s life, as we know it.  Thematically, it shares some notions with I Timothy, but seems to speak to an emerging Christianity rather than an apostolic Christianity. 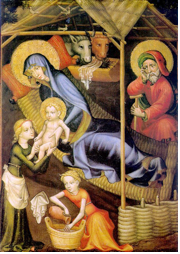 In those days a decree went out from Emperor Augustus that all the world should be registered. This was the first registration and was taken while Quirinius was governor of Syria. All went to their own towns to be registered. Joseph also went from the town of Nazareth in Galilee to Judea, to the city of David called Bethlehem, because he was descended from the house and family of David. He went to be registered with Mary, to whom he was engaged and who was expecting a child. While they were there, the time came for her to deliver her child. And she gave birth to her firstborn son and wrapped him in bands of cloth, and laid him in a manger, because there was no place for them in the inn.

In that region there were shepherds living in the fields, keeping watch over their flock by night. Then an angel of the Lord stood before them, and the glory of the Lord shone around them, and they were terrified. But the angel said to them, "Do not be afraid; for see-- I am bringing you good news of great joy for all the people: to you is born this day in the city of David a Savior, who is the Messiah, the Lord. This will be a sign for you: you will find a child wrapped in bands of cloth and lying in a manger." And suddenly there was with the angel a multitude of the heavenly host, praising God and saying,

"Glory to God in the highest heaven,

and on earth peace among those whom he favors!"

When the angels had left them and gone into heaven, the shepherds said to one another, "Let us go now to Bethlehem and see this thing that has taken place, which the Lord has made known to us." So they went with haste and found Mary and Joseph, and the child lying in the manger. When they saw this, they made known what had been told them about this child; and all who heard it were amazed at what the shepherds told them. But Mary treasured all these words and pondered them in her heart. The shepherds returned, glorifying and praising God for all they had heard and seen, as it had been told them.

Here we have the heart of Christmas belief for most Christians in probably what is the most memorable of biblical verses.  Luke wants us to understand that God gives us the gift of a son, Jesus, in time.  This is a prophetic writing – that God’s good news of redemption should be now, in our time, for our benefit.  The rehearsal is quite simple: the time at which it happened, why Mary and Joseph were traveling, and the event of the birth.  The embellishment comes when Luke begins to talk about what comes of this story – so quickly rehearsed.  It is here that we turn to the shepherds, not the highest on the social totem pole in ancient Israel.  Yet, it was to such as these that the angels sing a song of praise and invitation, and it is such as these who understand the message and go to Bethlehem.  This is consistent with Luke’s social program, in which the kingdom of God is most present amongst the poor and marginalized.  So the shepherds are given the divine presence, song, and invitation.

O God, you have caused this holy night to shine with the brightness of the true Light: Grant that we, who have known the mystery of that Light on earth, may also enjoy him perfectly in heaven; where with you and the Holy Spirit he lives and reigns, one God, in glory everlasting. Amen.