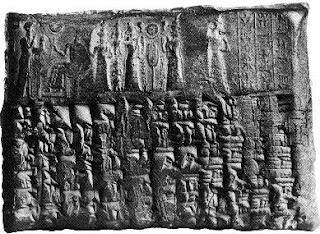 If Lent is indeed a period of preparation for either baptism or the renewal of baptism, then we need to ask ourselves what it is that we can learn from today’s readings.  There is one aspect to the selection from the Hebrew Scriptures that serves as a background to so much of Jewish and Christian theology, and that is the notion of the covenant.  In today’s world, where agreements between individuals is hemmed in on every side by legalese designed to confound the reader, the notion of the covenant (read “contract”) probably needs some explanation.  Agreements of this sort were the stuff of the Ancient Near East, and we have examples of many of them.  Such covenants and contracts were either written down, or witnessed to in a ceremony such as we have in the first reading.  Gods were always a part of such agreements, and heaven and earth often served as witnesses to these agreements.  I shall comment on the covenant with Abraham in the comments below.

The word of the LORD came to Abram in a vision, "Do not be afraid, Abram, I am your shield; your reward shall be very great." But Abram said, "O Lord GOD, what will you give me, for I continue childless, and the heir of my house is Eliezer of Damascus?" And Abram said, "You have given me no offspring, and so a slave born in my house is to be my heir." But the word of the LORD came to him, "This man shall not be your heir; no one but your very own issue shall be your heir." He brought him outside and said, "Look toward heaven and count the stars, if you are able to count them." Then he said to him, "So shall your descendants be." And he believed the LORD; and the LORD reckoned it to him as righteousness.
Then he said to him, "I am the LORD who brought you from Ur of the Chaldeans, to give you this land to possess." But he said, "O Lord GOD, how am I to know that I shall possess it?" He said to him, "Bring me a heifer three years old, a female goat three years old, a ram three years old, a turtledove, and a young pigeon." He brought him all these and cut them in two, laying each half over against the other; but he did not cut the birds in two. And when birds of prey came down on the carcasses, Abram drove them away.
As the sun was going down, a deep sleep fell upon Abram, and a deep and terrifying darkness descended upon him.
When the sun had gone down and it was dark, a smoking fire pot and a flaming torch passed between these pieces. On that day the LORD made a covenant with Abram, saying, "To your descendants I give this land, from the river of Egypt to the great river, the river Euphrates."
This is an amazing reading concerning one of several covenant ceremonies that are made between Abraham and God.  In the initial paragraph, Abraham complains to God about the fact that he has no heir – and God responds with language of call and of promise.  Even before this conversation begins we recognize that this is not an ordinary audience, but rather one born of the Spirit – the session begins with “The Word of the Lord (read “Spirit”) came to Abraham…”.  What follows is a rehearsal of Abraham’s history and a request for an offering.  In Hebrew one doesn’t “make a covenant”, the verb is to “cut a covenant” and we see the results of that in the sacrificial request.  Here the offerings are cut in half – the blood offering a testament to the agreement about to be entered into by Abraham and God.  In daily life such contracts were common, often made between two individuals, who both participate in the shedding of blood (the sacrificial animals) that “seals” the covenant.  Both individuals would walk in the midst of the offerings that had been cut (hence “cut a covenant”) in half.  The smoking fire pot and torch that pass between the halves of the offering represent God’s presence as a party to the contract with Abraham.
Breaking Open Genesis: 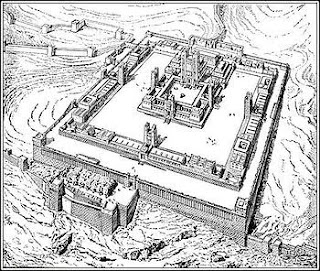 Psalm 27 Dominus illuminatio
The LORD is my light and my salvation; whom then shall I fear? *
the LORD is the strength of my life; of whom then shall I be afraid?
When evildoers came upon me to eat up my flesh, *
it was they, my foes and my adversaries, who stumbled and fell.
Though an army should encamp against me, *
yet my heart shall not be afraid;
And though war should rise up against me, *
yet will I put my trust in him.
One thing have I asked of the LORD; one thing I seek; *
that I may dwell in the house of the LORD all the days of my life;
To behold the fair beauty of the LORD *
and to seek him in his temple.
For in the day of trouble he shall keep me safe in his shelter; *
he shall hide me in the secrecy of his dwelling and set me high upon a rock.
Even now he lifts up my head *
above my enemies round about me.
Therefore I will offer in his dwelling an oblation with sounds of great gladness; *
I will sing and make music to the LORD.
Hearken to my voice, O LORD, when I call; *
have mercy on me and answer me.
You speak in my heart and say, "Seek my face." *
Your face, LORD, will I seek.
Hide not your face from me, *
nor turn away your servant in displeasure.
You have been my helper;
cast me not away; *
do not forsake me, O God of my salvation.
Though my father and my mother forsake me, *
the LORD will sustain me.
Show me your way, O LORD; *
lead me on a level path, because of my enemies.
Deliver me not into the hand of my adversaries, *
for false witnesses have risen up against me, and also those who speak malice.
What if I had not believed that I should see the goodness of the LORD *
in the land of the living!
O tarry and await the LORD'S pleasure; be strong, and he shall comfort your heart; *
wait patiently for the LORD.
This psalm, represented to us as one work, is actually two.  The first section, verses 1-6, has a relatively happy and positive tone.  There is an immediate response to life’s troubles, mediated by a loving and accessible God. The tone becomes darker at verse 7, continuing on through the end.  Here the threat of “enemies” is more palpable; indeed, they are represented as voracious beasts.  There is one notion that binds both of the sections together, and that is the presence of God in his temple.  It is here in the presence of the psalmist’s God (literally in God’s face), that the psalmist is able to confess his faith in the protective nature of God with the statements, “I trust” and “I believe.”
Breaking open Psalm 27

Brothers and sisters, join in imitating me, and observe those who live according to the example you have in us. For many live as enemies of the cross of Christ; I have often told you of them, and now I tell you even with tears. Their end is destruction; their god is the belly; and their glory is in their shame; their minds are set on earthly things. But our citizenship is in heaven, and it is from there that we are expecting a Savior, the Lord Jesus Christ. He will transform the body of our humiliation that it may be conformed to the body of his glory, by the power that also enables him to make all things subject to himself. Therefore, my brothers and sisters, whom I love and long for, my joy and crown, stand firm in the Lord in this way, my beloved.
The church at Philippi was both generous and beloved of Paul.  It is accepted that he wrote this letter, probably around 62 CE, expressing his love for them.  In this reading, Paul, as he is wont to do, sets up a contrast and dichotomy for his reader.  Set against the “enemies of the cross of Christ” is the example of the Philippians themselves.  The former group is of this world, completely obsessed with possessions and their appetites.  Paul sees the Philippians as “heavenly citizens” whose humiliation in the world is a representation of the suffering Christ (who of course is glorified in the resurrection).  Such is the inheritance of those who believe.
Breaking open Philippians:

Some Pharisees came and said to Jesus, "Get away from here, for Herod wants to kill you." He said to them, "Go and tell that fox for me, 'Listen, I am casting out demons and performing cures today and tomorrow, and on the third day I finish my work. Yet today, tomorrow, and the next day I must be on my way, because it is impossible for a prophet to be killed outside of Jerusalem.' Jerusalem, Jerusalem, the city that kills the prophets and stones those who are sent to it! How often have I desired to gather your children together as a hen gathers her brood under her wings, and you were not willing! See, your house is left to you. And I tell you, you will not see me until the time comes when you say, 'Blessed is the one who comes in the name of the Lord.'" 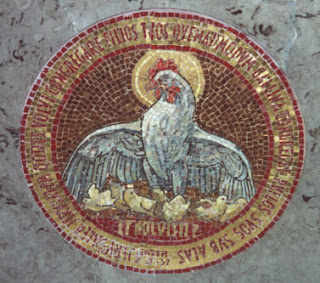 This reading from Luke is filled with so many images, the most touching of which is the picture of God (Jesus) as a hen gathering and protecting her brood under a protective wing.  In a sense, this passage is similar to the question of the disciples of John the Baptist, who ask Jesus “are you the one, or are we looking for another.”  To the cynicism of the Pharisees, Jesus responds with lists of deeds, signs, really, of the messianic era.  There is a reference to the three days, and to the fate of prophets, especially in Jerusalem.  All of this has a result, however, in a statement of faith of those who see Jesus and his works, “Blessed is the one who comes…”
Breaking open the Gospel:
After breaking open the Word, you might want to pray the Collect for Sunday:
O God, whose glory it is always to have mercy: Be gracious to all who have gone astray from your ways, and bring them again with penitent hearts and steadfast faith to embrace and hold fast the unchangeable truth of your Word, Jesus Christ your Son; who with you and the Holy Spirit lives and reigns, one God, for ever and ever. Amen.