Showing posts from November, 2013
Show all

The Second Sunday of Advent, 8 December 2013 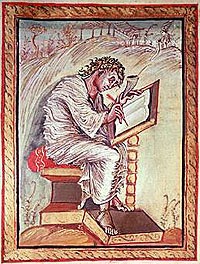 Background:The Gospel of St. Matthew – Audience and Setting Traditionally the audience for Matthew was thought to be a people speaking either Aramaic, or Hebrew, living in Palestine.The vocabulary and structure of the book seemed to lead scholars in that direction.Some even envisaged that the book had been originally written in either Hebrew or Aramaic.Now there is some evidence that the audience intended may have lived outside of Palestine, perhaps in Alexandria, Egypt, the home to a large population of Jews, or perhaps in Phoenician areas of the Levant, or Caesarea.There has been some consensus that the actual audience was a community of Christians and Jews living in Antioch (Syria).As Matthew begins to speak of the ministry of Jesus, in 4:24, we read of the spread of the Gospel to “all of Syria.”If we look in the book of Acts (11:19-26), we can read of the evangelization of Ge…
Post a Comment
Read more

Background:A Year of Matthew With this First Sunday of Advent, we enter Year A of the Revised Common Lectionary (RCL).The predominant Gospel during this cycle will be the Gospel According to Saint Matthew.Here are some background materials on this Gospel.Until the nineteenth century, the Gospel of Matthew enjoyed a primacy of quotation and usage in the Church.However, with the rediscovery of the importance of Mark to both Matthew and Luke, Matthew has enjoyed the same critical examination that has been afforded the other Gospels.The authorship of Matthew, once acknowledged as Matthew – one of the Twelve – is now not so certain.These aspects, however are recognized:1) The Gospel was written by a Jewish Christian, who knew Hebrew.Matthew makes deep connections between the Hebrew Scriptures and the life of Jesus.When the author quotes the Hebrew Scriptures the Hebrew original is quoted rathe…
Post a Comment
Read more
More posts