Showing posts from June, 2017
Show all

Pentecost IV, Proper 8, 2 July 2017 Track One: Genesis 22:1-14 Psalm 13 Track Two: Jeremiah 28:5-9 Psalm 89:1-4, 15-18 Romans 6:12-23 St. Matthew 10:40-42 Background: The Prophets Prophecy and prophets are not unique to either Israel, or to the Bible. There are several examples from the cultures of the Ancient Near East, wherein the prophet was seen as a messenger from the gods. In Israel, the prophet received the message from God via the agency of dreams, visions, or a direct communication from God. The difficulty was, however, how such messages might be authenticated – often times the messages were in conflict with another prophet’s vision. We see that especially in the work of Jeremiah. Much of the prophetic work was oral rather than written, and was often introduced with a “messenger formula” Thus says the Lord. The form of these messages was various, using the mode of legal writs, laments, hymnody, curses, oracles, and similar forms. The conten
Post a Comment
Read more 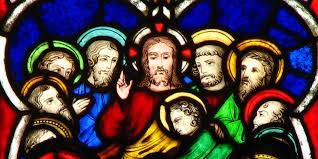 Pentecost III, Proper 7, 25 June 2017 Track One: Genesis 21:8-21 Psalm 86:1-10, 16-17 Track Two: Jeremiah 20:7-13 Psalm 69:8-11, (12-17), 18-20 Romans 6:1b-11 St. Matthew 10:24-39 Background: Disciple Although this word is usually heard in a Christian context, there are examples from the Hebrew Scriptures as well. In Hebrew the term is translated as “scholar” or “pupil”.   A good example is in Isaiah 8:16 , where the prophet realizing that his word is not being well received entrusts it to his disciples so that they might reveal it at a future time. In the New Testament, the Greek vocable mathetes is a form derived from the verb “to learn.” Track One: First Reading: Genesis 21:8-21 The child grew, and was weaned; and Abraham made a great feast on the day that Isaac was weaned. But Sarah saw the son of Hagar the Egyptian, whom she had borne to Abraham, playing with her son Isaac. So she said to Abraham, “Cast out this slave woman with
Post a Comment
Read more
More posts