Showing posts from February, 2019
Show all

The Last Sunday after the Epiphany, 3 March 2019

The Last Sunday after the Epiphany, 3 March 2019 Exodus 34:29-35 Psalm 99 II Corinthians 3:12-4:2 Saint Luke 9:28-36 Background: The Feast of the Transfiguration   The earliest that we know of a celebration of the Transfiguration was in the ninth century. Later Pope Calixtus III moved the celebration to 6 August to commemorate the victory at the Siege of Belgrade in 1456. Celebration on this date is known in the Syrian Orthodox, Indian Orthodoxd, Orthodox churches using the revised Julian calendars, Catholic, Old Catholic, and Anglican Churches. Lutheran Churches following the reforms that followed Vatican II and the introduction of the Three-Year Lectionary also celebrate the day on 6 August, although the readings for the Last Sunday after the Epiphany rehearse those readings as well. The Church of Sweden and the Church of Finland celebrate the feast on the Seventh Sunday after Trinity. First Reading: Exodus 34:29-35   M oses came down from Mount Sinai
Post a Comment
Read more

The Seventh Sunday after the Epiphany, 24 February 2019 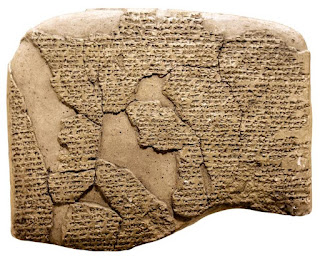 The   Seventh Sunday after the Epiphany, 24 February 2019 Genesis 45:3-11, 15 Psalm 37:1-12, 41-42 I Corinthians 15:35-38, 42-50 Saint Luke 6:27-38 Background: Blessings and Curses   The style that Luke uses in his version of the Sermon on the Mount has Jesus proclaim blessings (Blessed are…) and curses (Woe to you…) to both poor and rich. He follows, in doing that, a rich tradition from the Hebrew Scriptures which saw such proclamations as a part of the Covenant tradition, and the forms that it followed from Hittite treaty and suzerainty traditions in the Ancient Near East. The Israelites knew these forms from the codes and agreements that they lived under during their rule by Hittites, Egyptians, and Assyrians. The forms of Israelite covenant most closely follow the Hittite forms. The treaty form had the following elements:   1)      Preamble – which named the parties of the treaty, the suzerain and the vassal. 2)      Prologue – notes the history of th
Post a Comment
Read more
More posts