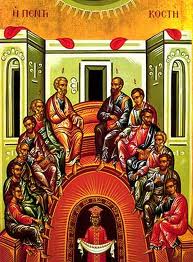 Background: Pentecost
Originally this was a harvest festival that also commemorated the giving of the Law on Mt. Sinai.  The fifty days (Pentecost) were counted from the Pesach, the Passover meal.  St. Luke places the sending of the Holy Spirit on the occasion of this festival, the city being crowded with pilgrims from all over the diaspora.  In the early church, the festival of Pentecost was a unitive festival celebrating the Ascension and the outpouring of the Holy Spirit.  It was not until the fourth century that Ascension Day was established at the fortieth day after the Pesach, Easter Day.  That the day, which commemorates the giving of the Law, is chosen also as the day that commemorates the outpouring of the Holy Spirit is surely not accidental.  Both commemorations form significant demarcations in time, at which something new and significant happens for the people of God.

Acts 2:1-21
When the day of Pentecost had come, the disciples were all together in one place. And suddenly from heaven there came a sound like the rush of a violent wind, and it filled the entire house where they were sitting. Divided tongues, as of fire, appeared among them, and a tongue rested on each of them. All of them were filled with the Holy Spirit and began to speak in other languages, as the Spirit gave them ability.

Now there were devout Jews from every nation under heaven living in Jerusalem. And at this sound the crowd gathered and was bewildered, because each one heard them speaking in the native language of each. Amazed and astonished, they asked, "Are not all these who are speaking Galileans? And how is it that we hear, each of us, in our own native language? Parthians, Medes, Elamites, and residents of Mesopotamia, Judea and Cappadocia, Pontus and Asia, Phrygia and Pamphylia, Egypt and the parts of Libya belonging to Cyrene, and visitors from Rome, both Jews and proselytes, Cretans and Arabs-- in our own languages we hear them speaking about God's deeds of power." All were amazed and perplexed, saying to one another, "What does this mean?" But others sneered and said, "They are filled with new wine."
But Peter, standing with the eleven, raised his voice and addressed them, "Men of Judea and all who live in Jerusalem, let this be known to you, and listen to what I say. Indeed, these are not drunk, as you suppose, for it is only nine o'clock in the morning. No, this is what was spoken through the prophet Joel:

`In the last days it will be, God declares,
that I will pour out my Spirit upon all flesh,
and your sons and your daughters shall prophesy,
and your young men shall see visions,
and your old men shall dream dreams.
Even upon my slaves, both men and women,
in those days I will pour out my Spirit;
and they shall prophesy.
And I will show portents in the heaven above
and signs on the earth below, blood, and fire, and smoky mist.
The sun shall be turned to darkness
and the moon to blood,
before the coming of the Lord's great and glorious day.
Then everyone who calls on the name of the Lord shall be saved.' " Saint Luke signals to us that something significant is about to happen by using a formula that is also used at the birth of Jesus (when the days were fulfilled) and at his departure for Jerusalem (when the days for his being taken up were fulfilled).  Here it is stated as, “when the time for Pentecost was fulfilled”.  What happened at Sinai, and what happens at Pentecost in Jerusalem are similar events.  Both are the occasions of a theophany, an appearance of the divine, such as at the Transfiguration and at the giving of the Law at Sinai.  The early community attached a special significance to this Jewish feast day, and saw and heard in its celebrations the gift of the Spirit, evidenced in a mighty breath (Ruah, and wind), and in tongues of flame.  And to signal its continuity with the ancient faith, Peter quotes the prophet Joel in an expansive verse that signals God’s gift not only to Israel, but also to all, signaling what will come in the mission to the Gentiles.

O LORD, how manifold are your works! *
in wisdom you have made them all;
the earth is full of your creatures.

Yonder is the great and wide sea
with its living things too many to number, *
creatures both small and great.

There move the ships,
and there is that Leviathan, *
which you have made for the sport of it.

All of them look to you *
to give them their food in due season.

You give it to them; they gather it; *
you open your hand, and they are filled with good things.

You hide your face, and they are terrified; *
you take away their breath,
and they die and return to their dust.

You send forth your Spirit, and they are created; *
and so you renew the face of the earth.

May the glory of the LORD endure for ever; *
may the LORD rejoice in all his works.

He looks at the earth and it trembles; *
he touches the mountains and they smoke.

I will sing to the LORD as long as I live; *
I will praise my God while I have my being.

May these words of mine please him; *
I will rejoice in the LORD. 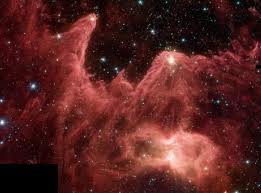 This psalm, which is a celebration of the whole of creation, focuses in these verses on two ideas – the sea and water, and the breath.  Both were important notions in the liturgical language of the ancient near east.  The sea symbolized chaos that had been brought into order in the first days of creation.  It was a vision not only of power and immensity, but also of death and destruction.  In these verses, the author is in awe of the Creator’s work.  Later on, the author comments on the breath, that is the substance of life.  It is given by God, and God takes it away, and in that breath the face of the earth is renewed.  Subsequent verses remind us that our own breath praises God in the song and hymn that we offer.  Alter translates one phrase: “Let my speech (my breath) be sweet unto him.”

Romans 8:22-27
We know that the whole creation has been groaning in labor pains until now; and not only the creation, but we ourselves, who have the first fruits of the Spirit, groan inwardly while we wait for adoption, the redemption of our bodies. For in hope we were saved. Now hope that is seen is not hope. For who hopes for what is seen? But if we hope for what we do not see, we wait for it with patience.

Like the ancients, Paul looked out upon the world, and saw in its fecundity, and in the cycles of its demise something like a woman in labor.  In this image there is both pain and joy, and so Paul sees it as an event to be endured, and also as an event that brings both hope and promise.  The Spirit is present in this reading as well.  As we, along with creation, moan and groan, yet hoping for promise and renewal, it is the Spirit who refreshes the face of the earth (see the Psalm), and gives new birth to what we thought was forsaken and unspeakable.  The Spirit gives words to our attempts to address God.

John 15:26-27; 16:4b-15
Jesus said to his disciples, "When the Advocate comes, whom I will send to you from the Father, the Spirit of truth who comes from the Father, he will testify on my behalf. You also are to testify because you have been with me from the beginning.

"I did not say these things to you from the beginning, because I was with you. But, now I am going to him who sent me; yet none of you asks me, `Where are you going?' But because I have said these things to you, sorrow has filled your hearts. Nevertheless I tell you the truth: it is to your advantage that I go away, for if I do not go away, the Advocate will not come to you; but if I go, I will send him to you. And when he comes, he will prove the world wrong about sin and righteousness and judgment: about sin, because they do not believe in me; about righteousness, because I am going to the Father and you will see me no longer; about judgment, because the ruler of this world has been condemned. 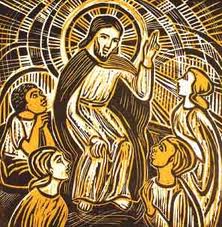 What we witness here in this Gospel are the pains of a farewell.  Jesus, keenly aware of the disciples’ grief at his departure (just as he has been restored to them) reminds them that there is something more that has been promised.  It is the Spirit who will come and continue the witness to them.  It is a complicated scene, full of the emotions of departure.  Jesus tries to bring both focus and hope to them.  He separates them from the world, and makes of them a community in the Father, witnessed to by the Spirit, and seeing the righteousness that God extends to them.  “I still have many things to say to you, but you cannot bear them now.”  That is, I think, still our status, as we await our Lord, protected by the Spirit.

Almighty God, on this day you opened the way of eternal life to every race and nation by the promised gift of your Holy Spirit: Shed abroad this gift throughout the world by the preaching of the Gospel, that it may reach to the ends of the earth; through Jesus Christ our Lord, who lives and reigns with you, in the unity of the Holy Spirit, one God, for ever and ever. Amen.