Background: The Feast of the Holy Trinity
The celebration of the Holy Trinity as a feast day in the liturgical year is a relatively recent development.  In early Church there was no special day devoted to the Holy Trinity.  As a response, however, to the Arian heresy, certain offices, prayers, and other liturgical materials were made available as a response to the controversy.  In the fifth century an Office of the Holy Trinity began to emerge as a way of honoring the Trinity. Some of the arguments against having a special day were that the Trinity was honored each Sunday and Holy Day in the Gloria in Excelsis.  Slowly the feast developed as a local usage, then becoming a minor feast adding more and more privileges to the day, until 1924 when it was raised as a primary feast by Pius X.  It was J. S. Bach who raised awareness of the feast through his many cantatas for the Day itself, and for all the Sundays “after Trinity.”  With the reforms of Vatican II, the term “after Trinity” was replaced by “after Pentecost” and the Episcopal and Lutheran Churches followed suit.
Isaiah 6:1-8
In the year that King Uzziah died, I saw the Lord sitting on a throne, high and lofty; and the hem of his robe filled the temple. Seraphs were in attendance above him; each had six wings: with two they covered their faces, and with two they covered their feet, and with two they flew. And one called to another and said:

"Holy, holy, holy is the LORD of hosts;
the whole earth is full of his glory."

The pivots on the thresholds shook at the voices of those who called, and the house filled with smoke. And I said: "Woe is me! I am lost, for I am a man of unclean lips, and I live among a people of unclean lips; yet my eyes have seen the King, the LORD of hosts!"

Then one of the seraphs flew to me, holding a live coal that had been taken from the altar with a pair of tongs. The seraph touched my mouth with it and said: "Now that this has touched your lips, your guilt has departed and your sin is blotted out." Then I heard the voice of the Lord saying, "Whom shall I send, and who will go for us?" And I said, "Here am I; send me!"

When writing ancillary materials for his Deutsche Messe (German Mass), Martin Luther took this passage from the first Isaiah and used it in hymnic form as the Sanctus in the Eucharistic Liturgy.  It is an appropriate borrowing, for Isaiah is setting down his inaugural vision of the Holy One of Israel.  The scene is set in the Temple.  There is incense, the heavenly Seraphim (literally the burning ones – common in the ancient near east), and the holy song that is sung by the heavenly court.  In the midst of this divine scene God calls one of humankind to “go for us”.  His initial thoughts of unworthiness are answered by God’s cleansing his tongue with a coal from the altar.  It is one of the most fascinating of the texts from Isaiah.

Glory to you, Lord God of our fathers; *
you are worthy of praise; glory to you.
Glory to you for the radiance of your holy Name; *
we will praise you and highly exalt you for ever.

Glory to you in the splendor of your temple; *
on the throne of your majesty, glory to you.
Glory to you, seated between the Cherubim; *
we will praise you and highly exalt you for ever.

Glory to you, beholding the depths; *
in the high vault of heaven, glory to you.
Glory to you, Father, Son, and Holy Spirit; *
we will praise you and highly exalt you for ever. 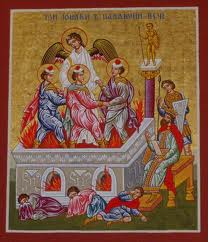 This canticle is an apocryphal addition to the text of Daniel that appears in the Greek translation of the Hebrew Scriptures, the Septuagint.  It is called the Prayer of Azariah and represents a prayer by him in which he confesses not only his own sins, but also those of Israel, and pleads to God to save them from the fiery furnace into which the three young men had been cast.  An angel comes to cool and deliver them from their fate.  In the Eastern Church this hymn is sung at matins,

Breaking open the Song of the Three Young men.

Romans 8:12-17
So then, brothers and sisters, we are debtors, not to the flesh, to live according to the flesh-- for if you live according to the flesh, you will die; but if by the Spirit you put to death the deeds of the body, you will live. For all who are led by the Spirit of God are children of God. For you did not receive a spirit of slavery to fall back into fear, but you have received a spirit of adoption. When we cry, "Abba! Father!" it is that very Spirit bearing witness with our spirit that we are children of God, and if children, then heirs, heirs of God and joint heirs with Christ-- if, in fact, we suffer with him so that we may also be glorified with him. 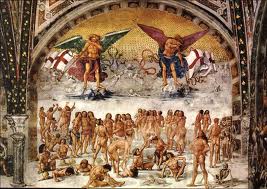 Saint Paul wants us to understand that it is one thing to be alive, to be created, to be the creature, but that it is totally something else as we move from being created to be adopted.  This latter state gives us more than life in giving us a relationship with God.  For Paul, one word or phrase is not enough, and his development of the notion of adoption in verse 17 is perfect Paul.  Children, heirs, joint heirs with Christ, all describe the beauty of the testimony that the Spirit makes to our spirit.

"Very truly, I tell you, we speak of what we know and testify to what we have seen; yet you do not receive our testimony. If I have told you about earthly things and you do not believe, how can you believe if I tell you about heavenly things? No one has ascended into heaven except the one who descended from heaven, the Son of Man. And just as Moses lifted up the serpent in the wilderness, so must the Son of Man be lifted up, that whoever believes in him may have eternal life.

"For God so loved the world that he gave his only Son, so that everyone who believes in him may not perish but may have eternal life.

"Indeed, God did not send the Son into the world to condemn the world, but in order that the world might be saved through him." 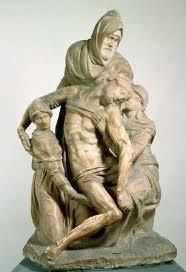 This is a familiar text to us, and by looking at it once again we can begin to understand the whole idea behind being “born again”, a term that has been wrested from us by fundamentalists who have lost the original vision.  John develops his dialogue with Nicodemus into a monologue in which Jesus continues to explore things “from above”.  First a few insights into the text.  Nicodemus is the quintessence of Judaism.  He is a rabbi, a Pharisee, and a member of the Sanhedrin (the Jewish ruling body, recognized by the Roman over lords), and, significantly, he comes in the night.  This is a sign to us that Nicodemus comes fearing what others might think of his meeting with Jesus, and symbolically comes to Jesus “out of the darkness.”  Nicodemus is impressed by Jesus’ signs, and wants to know more.  Jesus talks about being born from above, a more faithful rendering of the Greek than the popular rendering of being born again.  It should not have been a phrase unknown to Nicodemus, for it was used by Jews to describe those Gentiles who had converted to Judaism.

Jesus slides into his monologue on understanding the earthly and the heavenly, going on to provide two gem-like verses that describe God’s intentions for human kind and salvation.  Many commentators think that these last verses are not from Christ at all, but represent John’s own personal belief about “heavenly things” are brought about in the world of humans.

Almighty and everlasting God, you have given to us your servants grace, by the confession of a true faith, to acknowledge the glory of the eternal Trinity, and in the power of your divine Majesty to worship the Unity: Keep us steadfast in this faith and worship, and bring us at last to see you in your one and eternal glory, O Father; who with the Son and the Holy Spirit live and reign, one God, for ever and ever. Amen.