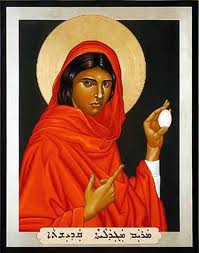 Background: Mary of Magdala
The topic of Mary Magdalene has become both problematic and enriched within the last couple of decades.  Beginning with the book Holy Blood, Holy Grail and continuing on through The Da Vinci Code, the speculation about Mary, abetted by the conversations on the Gospel of Thomas and other apocryphal works, Mary Magdalene has become a major point of conversation among Christians.  Her supposed marriage to Jesus has been the center of several works of fiction, Kazantzakis’ The Last Temptation of Jesus, Saramago’s The Gospel According to Jesus Christ, and Andrew Lloyd Weber’s opera Jesus Christ Superstar.  There is a real question as to for what we might honor her on her feast day.  In the past she was honored as the penitent, the woman saved from the “seven demons”.  Her role has a prostitute has been largely rejected, and the Church seems to have taken on a new honorific for her – “Apostle to the Apostles.”  She is the first to see the Risen Lord (cf. John 20, and Mark 16), and thus such a title is both appropriate and scriptural.  The vagaries of her story in the life of the Church are too complicated to pursue here.  She is however, a powerful model of Easter life and hope.

Judith prostrated herself, put ashes on her head, and uncovered the sackcloth she was wearing. At the very time when the evening incense was being offered in the house of God in Jerusalem, Judith cried out to the Lord with a loud voice, and said, "Your strength does not depend on numbers, nor your might on the powerful. But you are the God of the lowly, helper of the oppressed, upholder of the weak, protector of the forsaken, savior of those without hope. Please, please, God of my father, God of the heritage of Israel, Lord of heaven and earth, Creator of the waters, King of all your creation, hear my prayer! Make my deceitful words bring wound and bruise on those who have planned cruel things against your covenant, and against your sacred house, and against Mount Zion, and against the house your children possess. Let your whole nation and every tribe know and understand that you are God, the God of all power and might, and that there is no other who protects the people of Israel but you alone!" 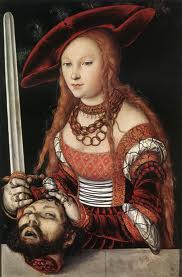 The deuterocanonical book of Judith exists only in Greek, although that text mirrors a more ancient Hebrew text that is unknown to us today.  It is not included in the Hebrew canon, however readings from the book are provided for reading on the feast of Hanukkah.  St. Jerome mentions readings from the book in the Church, and the Council of Trent (1545-1563) recognized its canonicity for the Roman Church.  The Anglican and Lutheran churches have assigned it as an Apocryphal Book, and readings from it appear in their lectionaries.

Judith, a feminine form of “Judah” is essentially a series of teaching that takes as its basis the Exodus from Egypt, and applies that theology to the chaos that came after the fall of Jerusalem in 587.  The God of Israel, i.e., the God who brought Israel out of Egypt, is the God that continues to rescue the people of Israel and to guide and rule them.  In this passage, Judith (not a historical figure) is shown as offering prayers to God at the time of the evening sacrifice.  She begs for God’s on-going aid and protection for her people.

As the deer longs for the water-brooks, *
so longs my soul for you, O God.

My soul is athirst for God, athirst for the living God; *
when shall I come to appear before the presence of God?

My tears have been my food day and night, *
while all day long they say to me,
"Where now is your God?"

I pour out my soul when I think on these things: *
how I went with the multitude and led them into the house of God,

With the voice of praise and thanksgiving, *
among those who keep holy-day.

Put your trust in God; *
for I will yet give thanks to him,
who is the help of my countenance, and my God. 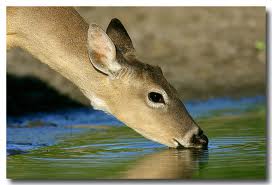 The use of this psalm on this day honoring Mary of Magdala highlights her emotions in the scene from John 20.  The psalm lifts up the author’s “longing for God”, a longing that we shall see in the reading from John.  In supplications such as this, the poet is usually yearning for relief from an enemy, but her the yearning is for the presence of God.  The themes of thirst, streams of water, and tears (a meal of tears accentuates the notion of thirst) become vivid icons of the psychological state of the poet.  The other themes that relate the intimacy and essential character of the relationship are: “I pour out my soul” (read: breath), and “my whole being”.  All of this is an underscore for the Gospel reading for this day.

The love of Christ urges us on, because we are convinced that one has died for all; therefore all have died. And he died for all, so that those who live might live no longer for themselves, but for him who died and was raised for them.

From now on, therefore, we regard no one from a human point of view; even though we once knew Christ from a human point of view, we know him no longer in that way. So if anyone is in Christ, there is a new creation: everything old has passed away; see, everything has become new! All this is from God, who reconciled us to himself through Christ, and has given us the ministry of reconciliation. 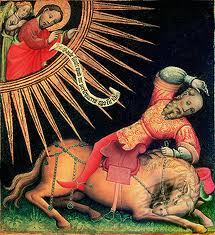 As if to continue the underlying relationship that is explicated in the psalm, the reading from IInd Corinthians begins with the relationship of Christ and the redeemed.  Implied in Paul’s logic is the beginning of this relationship with Jesus.  Paul knows Christ in a new way, no longer seeing him “from a human point of view”, and there is a love that has blossomed between them.  That, however, is only the beginning, for this love is then made manifest to not only Paul, the individual, but to all.  At the center of this relationship of love comes a new creation, a new way of seeing things, and reconciliation between God and humankind.

John 20:11-18
Mary stood weeping outside the tomb. As she wept, she bent over to look into the tomb; and she saw two angels in white, sitting where the body of Jesus had been lying, one at the head and the other at the feet. They said to her, "Woman, why are you weeping?" She said to them, "They have taken away my Lord, and I do not know where they have laid him." When she had said this, she turned around and saw Jesus standing there, but she did not know that it was Jesus. Jesus said to her, "Woman, why are you weeping? Whom are you looking for?" Supposing him to be the gardener, she said to him, "Sir, if you have carried him away, tell me where you have laid him, and I will take him away." Jesus said to her, "Mary!" She turned and said to him in Hebrew, "Rabbouni!" (Which means Teacher). Jesus said to her, "Do not hold on to me, because I have not yet ascended to the Father. But go to my brothers and say to them, `I am ascending to my Father and your Father, to my God and your God.'" Mary Magdalene went and announced to the disciples, "I have seen the Lord"; and she told them that he had said these things to her. 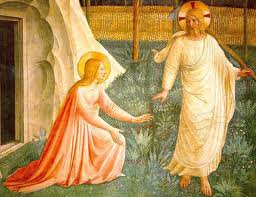 “I know my own, and my own know me” (John 10:14) Thus John describes the Good Shepherd.  It is a verse that can be applied as a level of understanding for this resurrection appearance to Mary of Magdala.  It is the voice of Jesus, and the repetition of her name, that startles Mary into a new realization.  She had seen the empty tomb, but its ramifications eluded her.  Now Jesus' presence, but more so his voice, and the implication of relationship make Mary see the truth of his resurrection.  The usual vocabulary is no longer sufficient.  Jesus is no longer just a teacher (Rabouni!) but has become more than that.  Thus he asks her not to touch him, for there is a new future now.  Again Mary becomes an Apostle (a sent-one) who comes with the message of the ascension.  It is she who announces the good news, “I have seen the Lord.”

Almighty God, whose blessed Son restored Mary Magdalene to health of body and of mind, and called her to be a witness of his resurrection: Mercifully grant that by your grace we may be healed from all our infirmities and know you in the power of his unending life; who with you and the Holy Spirit lives and reigns, one God, now and for ever. Amen.