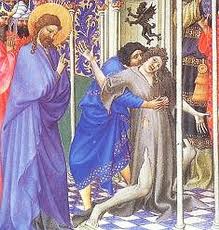 Background: Demons and Unclean Spirits
It is a bit nervous-making to take up this topic, and yet we cannot avoid it in today’s Gospel reading.  The concept of demons is almost universal in the ancient near east, with each culture; include the Israelite culture, having its own separate take on the notion of demons.  It should be noted that the word demon comes from the Greek daimon, which described spirits that were not necessarily evil.  These spirits were seen as providing a benevolent aspect to life.  In the Hebrew Scriptures, and in Christian writing, demons take on a malevolent air.  The often indicate the presence of disease, or psychological disturbances, and are seen as being connected to the Evil One.  In this aspect, the Gospels are truly participants in the knowledge and culture of their time, reflecting the beliefs of the ancients before them.

The Lord said to me: O mortal, stand up on your feet, and I will speak with you. And when he spoke to me, a spirit entered into me and set me on my feet; and I heard him speaking to me. He said to me, Mortal, I am sending you to the people of Israel, to a nation of rebels who have rebelled against me; they and their ancestors have transgressed against me to this very day. The descendants are impudent and stubborn. I am sending you to them, and you shall say to them, "Thus says the Lord GOD." Whether they hear or refuse to hear (for they are a rebellious house), they shall know that there has been a prophet among them. 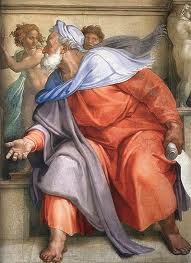 This reading is one of a series of commissions that the prophet receives from God.  As a group they describe the prophet’s call, his mission from God.  The first of these is a mission to communicate God’s essential difference from humanity, and serves as a foundation to the calls that will follow these verses.  The prophet, in his ecstasy, hears God contrasting God’s nature, with human nature.  The term “son of man” is usually used in these readings, but does not refer to the messianic “son of man.”  Here the words “O mortal” make the distinction.  God is immortal; humankind is mortal – unchangeable vs. the changeable. To mediate the message that God wants to give humankind, a spirit is sent into the prophet.  Israel is described as a group of rebels, and it is understood that their present state in exile is proof positive of their rebelliousness.  This first commission is to be the emissary to these rebels and to speak to them the Word of the Lord.

To you I lift up my eyes, *
to you enthroned in the heavens.

So our eyes look to the LORD our God, *
until he show us his mercy.

Have mercy upon us, O LORD, have mercy, *
for we have had more than enough of contempt,

Too much of the scorn of the indolent rich, *
and of the derision of the proud.

This is a very interesting psalm that begins with the supplications of an individual and quickly moves to the collective.  The first verse notes a posture of prayer that involves the eyes only.  It’s central metaphor, however, that of a slave to a master, may difficult for us in our time and culture to appropriate.  There is a note of collective inclusiveness, however, for it is both the servant (male) and the maid (female) with the same holding true for the master and mistress.  The final verses give us a glimpse of more than this suppliant service to overlords, as the author notes the contempt and derision in which certain classes are held.  It is in this state and perhaps because of this state that the psalm appeals to God for mercy.  I am at a loss to explain how this connects with the readings, unless there is a reference to Paul’s “weakness” in the second reading. 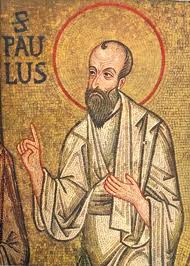 Paul wants to teach us a lesson in weakness and indeed humility, and does so by relating a likely personal story as having happened to another individual.  He, or the other, is caught up into the “third heaven” (here translated as “Paradise”).  (The first heaven was the earth’s atmosphere, the second the stars, and the third the divine abode).  Thus Paul (or the other) is soon in the presence of God.  He hears things there that he cannot repeat (the words used here are similar vocabulary used by those describing the revelations of a mystery religion).  The import of the report is not to repeat these learnings, but rather to talk about boasting and humility.  Because of these revelations, Paul is given a “thorn”, a physical affliction that suppresses his ability to boast.  This disability, this weakness, then becomes strength for Paul, a reminder of his place, and of the Lord in whose service he labors.

Mark 6:1-13
Jesus left that place and came to his hometown, and his disciples followed him. On the sabbath he began to teach in the synagogue, and many who heard him were astounded. They said, "Where did this man get all this? What is this wisdom that has been given to him? What deeds of power are being done by his hands! Is not this the carpenter, the son of Mary and brother of James and Joses and Judas and Simon, and are not his sisters here with us?" And they took offense at him. Then Jesus said to them, "Prophets are not without honor, except in their hometown, and among their own kin, and in their own house." And he could do no deed of power there, except that he laid his hands on a few sick people and cured them. And he was amazed at their unbelief.

Then he went about among the villages teaching. He called the twelve and began to send them out two by two, and gave them authority over the unclean spirits. He ordered them to take nothing for their journey except a staff; no bread, no bag, no money in their belts; but to wear sandals and not to put on two tunics. He said to them, "Wherever you enter a house, stay there until you leave the place. If any place will not welcome you and they refuse to hear you, as you leave, shake off the dust that is on your feet as a testimony against them." So they went out and proclaimed that all should repent. They cast out many demons, and anointed with oil many who were sick and cured them. 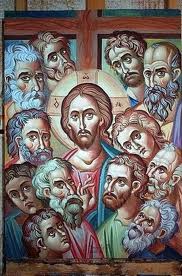 This liturgical reading bridges the closing section of Mark’s “Jesus and his own” and the opening of the section, “Jesus and his disciples.”  The conclusion of the former section foreshadows what will happen later in the Gospel.  The word that is translated as “hometown” in the first verse can also be read as “homeland”, a prefiguring of Israel’s rejection of Jesus.  This understanding is also underscored in the conclusion of the first section, “and he was amazed at their unbelief.”  The word for “unbelief” is a technical term that is later tied to the rejection of Israel.  It is interesting that the rejection of the prophet denies to those rejecting all the benefits that a prophet might bring.  Mark sets the stage for Jesus’ journey to Jerusalem and to the cross.

The next section deals with Jesus and his disciples.  The initial section is a conflation of three activities, some of which are amplified in later sections – 1) The institution of the twelve, 2) the sending out of the Twelve, and 3) a discourse to the twelve.  Mark’s version, written first, is somewhat different than that of Matthew.  Mark has a greater vision of the coming mission to the gentiles and so omits Jesus’ injunction not to enter into Gentile or Samaritan towns.  Jesus quickly gives a mission of preaching and repentance to the twelve, and begins to prepare them for the rejection of Jerusalem and the destiny of the cross.  As a sign of the messianic era, these disciples are empowered to cast out demons, and to heal.

O God, you have taught us to keep all your commandments by loving you and our neighbor: Grant us the grace of your Holy Spirit, that we may be devoted to you with our whole heart, and united to one another with pure affection; through Jesus Christ our Lord, who lives and reigns with you and the Holy Spirit, one God, for ever and ever. Amen.