The Fifth Sunday in Lent 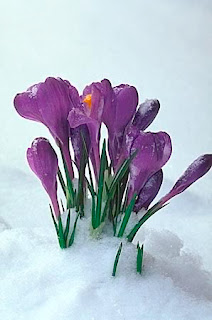 This Sunday, on the cusp of the devotions that accompany Holy Week, anticipates in what will come with the Triduum (The Great Three Days – Maundy Thursday, Good Friday, and the Vigil of Easter).  Each of the readings awaits what will come and what will be remembered. 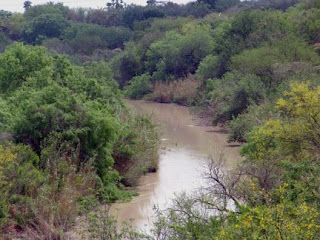 Psalm 126 In convertendo
When the LORD restored the fortunes of Zion, *
then were we like those who dream.
Then was our mouth filled with laughter, *
and our tongue with shouts of joy.
Then they said among the nations, *
"The LORD has done great things for them."
The LORD has done great things for us, *
and we are glad indeed.
Restore our fortunes, O LORD, *
like the watercourses of the Negev.
Those who sowed with tears *
will reap with songs of joy.
Those who go out weeping, carrying the seed, *
will come again with joy, shouldering their sheaves.
This psalm is designated a “pilgrim psalm” or a “song of assent”, a part of a collection of psalms that were sung as pilgrims ascended to Jerusalem.  Since Jerusalem sits on the spiny ridge that runs the length of Palestine, most pilgrims had to ascend, to climb up, to the holy city.  We are given some other clues as from where these pilgrims might have come – “Restore our fortunes, O Lord, like the watercourses of the Negev”.  The Negev is a triangular section of land, to the south of Palestine that runs between the Sinai peninsula, and the Arraba Valley.  Here the sudden spring rains fill the wadis (our arroyo) with rains that can replenish the land, or destroy anything standing in the way.  The mood of this psalm is akin to the first reading from Second Isaiah, where the pilgrim is giddy with gladness, remembering what God had done for them.  The psalm also may have been used at an autumnal harvest festival, where the crops mentioned would have resulted from the watercourses.
Breaking open the Isaiah

If anyone else has reason to be confident in the flesh, I have more: circumcised on the eighth day, a member of the people of Israel, of the tribe of Benjamin, a Hebrew born of Hebrews; as to the law, a Pharisee; as to zeal, a persecutor of the church; as to righteousness under the law, blameless.
Yet whatever gains I had, these I have come to regard as loss because of Christ. More than that, I regard everything as loss because of the surpassing value of knowing Christ Jesus my Lord. For his sake I have suffered the loss of all things, and I regard them as rubbish, in order that I may gain Christ and be found in him, not having a righteousness of my own that comes from the law, but one that comes through faith in Christ, the righteousness from God based on faith. I want to know Christ and the power of his resurrection and the sharing of his sufferings by becoming like him in his death, if somehow I may attain the resurrection from the dead.
Not that I have already obtained this or have already reached the goal; but I press on to make it my own, because Christ Jesus has made me his own. Beloved, I do not consider that I have made it my own; but this one thing I do: forgetting what lies behind and straining forward to what lies ahead, I press on toward the goal for the prize of the heavenly call of God in Christ Jesus.
Paul starts off with one of his proverbial lists.  He wants the Philippians to understand his credentials as a pious Jew – and he recites them all (circumcised on the eighth day, and so on).  He not only wants them to understand but to be impressed, because he is going to toss all of that aside for something that he views as even more important and impressive.  What is of value to Paul, then, is “knowing Christ Jesus my Lord.”  The reading especially fits in today because of the final paragraph where he discusses “the goal”.  What he listed earlier many might have thought of as an achievement, but Paul is striving for more.  Paul is striving for what lies ahead in Christ.  This notion of anticipation and expectancy form the themes for the readings today.  The questions that might form our devotions during the coming Holy Week could center around the question of what “lies ahead in Christ?”
Breaking open Philippians: 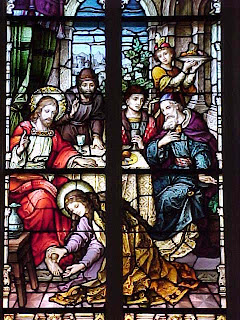 Six days before the Passover Jesus came to Bethany, the home of Lazarus, whom he had raised from the dead. There they gave a dinner for him. Martha served, and Lazarus was one of those at the table with him. Mary took a pound of costly perfume made of pure nard, anointed Jesus' feet, and wiped them with her hair. The house was filled with the fragrance of the perfume. But Judas Iscariot, one of his disciples (the one who was about to betray him), said, "Why was this perfume not sold for three hundred denarii and the money given to the poor?" (He said this not because he cared about the poor, but because he was a thief; he kept the common purse and used to steal what was put into it.) Jesus said, "Leave her alone. She bought it so that she might keep it for the day of my burial. You always have the poor with you, but you do not always have me."
This action by Mary, and its recounting by St. John, are moments of pure anticipation.  Here Mary anoints Jesus feet (something that any guest would have expected from their host) but does this in an unusual manner.  He is anointed with a very expensive unguent (and here we are to anticipate the Marys bringing spices to the tomb to prepare the dead Jesus for burial).  The situation, however, points out something else, namely, that the disciples still don’t get it – at least Judas Iscariot.  But this is anticipation as well, pointing out the one who will betray Jesus for money.  John is getting us reading for both cross and resurrection.
Breaking open the Gospel:
After breaking open the Word, you might want to pray the Collect for Sunday:
Almighty God, you alone can bring into order the unruly wills and affections of sinners: Grant your people grace to love what you command and desire what you promise; that, among the swift and varied changes of the world, our hearts may surely there be fixed where true joys are to be found; through Jesus Christ our Lord, who lives and reigns with you and the Holy Spirit, one God, now and for ever. Amen.