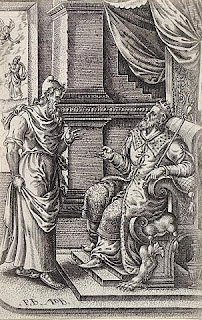 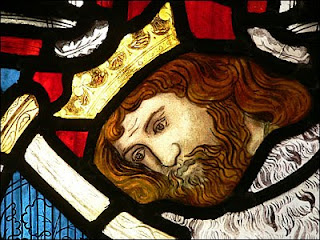 King David
Some commentators call this a “Thanksgiving Psalm”, and it’s notation as a “Maskil” has a connotation of being a joyous psalm.  Actually it is a psalm of confession, for the verses speak of confession and forgiveness, with resulting thanksgiving.  The psalm seems to be connected thematically with the reading from the Hebrew Scriptures, where David is confronted by the Prophet Nathan about the murder of Uriah, and the adultery with Bathsheba.  Ideally, the psalm could be David’s response of thanksgiving having admitted his sin and having been forgiven.  From verse 8 on, the psalm takes on a wisdom-like character, with verse 8 serving as an introduction to the aphorisms in the verses that follow.
Breaking open Psalm 32
1.     Have you ever been forgiven something – that was a great relief to you?
2.     Have you ever forgiven someone something that was a great relief to them?
3.     What goes on in your mind during the Confession of Sins, in the liturgy?
Galatians 2:15-21
We ourselves are Jews by birth and not Gentile sinners - yet we know that a person is justified not by the works of the law but through faith in Jesus Christ. And we have come to believe in Christ Jesus, so that we might be justified by faith in Christ, and not by doing the works of the law, because no one will be justified by the works of the law. But if, in our effort to be justified in Christ, we ourselves have been found to be sinners, is Christ then a servant of sin? Certainly not! But if I build up again the very things that I once tore down, then I demonstrate that I am a transgressor. For through the law I died to the law, so that I might live to God. I have been crucified with Christ; and it is no longer I who live, but it is Christ who lives in me. And the life I now live in the flesh I live by faith in the Son of God, who loved me and gave himself for me. I do not nullify the grace of God; for if justification comes through the law, then Christ died for nothing.
These verses in Paul’s letter to the Galatians seem to render an intense internal discussion that Paul has in his own mind.  The argument is about existence and essence: “who am I?”  Paul traces, with an unflagging preciseness the points of his argument – replete with irony and paradox.  Jew – Gentile, Sinner – Justified, the Law – Christ, dead to the Law – alive to God, alive in the flesh – alive in faith.  These are the poles of his argument about leaving the Law for the sake of the Gospel of Jesus Christ. The verses represent to us a powerful internal struggle in Paul’s mind that is not so much different from the internal struggles that every Christian has when confronted by their sin.  Although this is a virtual lectio continua (continuing reading) through Galatians, it seems to be serendipitously connected to the reading from II Samuel.
Breaking open Galatians: 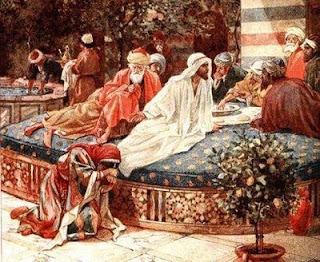 Saint Luke 7:36 – 8:3
One of the Pharisees asked Jesus to eat with him, and he went into the Pharisee's house and took his place at the table. And a woman in the city, who was a sinner, having learned that he was eating in the Pharisee's house, brought an alabaster jar of ointment. She stood behind him at his feet, weeping, and began to bathe his feet with her tears and to dry them with her hair. Then she continued kissing his feet and anointing them with the ointment. Now when the Pharisee who had invited him saw it, he said to himself, "If this man were a prophet, he would have known who and what kind of woman this is who is touching him-- that she is a sinner." Jesus spoke up and said to him, "Simon, I have something to say to you." "Teacher," he replied, "Speak." "A certain creditor had two debtors; one owed five hundred denarii, and the other fifty. When they could not pay, he canceled the debts for both of them. Now which of them will love him more?" Simon answered, "I suppose the one for whom he canceled the greater debt." And Jesus said to him, "You have judged rightly." Then turning toward the woman, he said to Simon, "Do you see this woman? I entered your house; you gave me no water for my feet, but she has bathed my feet with her tears and dried them with her hair. You gave me no kiss, but from the time I came in she has not stopped kissing my feet. You did not anoint my head with oil, but she has anointed my feet with ointment. Therefore, I tell you, her sins, which were many, have been forgiven; hence she has shown great love. But the one to whom little is forgiven, loves little." Then he said to her, "Your sins are forgiven." But those who were at the table with him began to say among themselves, "Who is this who even forgives sins?" And he said to the woman, "Your faith has saved you; go in peace."
Soon afterwards he went on through cities and villages, proclaiming and bringing the good news of the kingdom of God. The twelve were with him, as well as some women who had been cured of evil spirits and infirmities: Mary, called Magdalene, from whom seven demons had gone out, and Joanna, the wife of Herod's steward Chuza, and Susanna, and many others, who provided for them out of their resources.
There are several aspects to this reading from Luke.  The most notable is Jesus’ use of a present situation as a kind of parable, when he uses the example of the unnamed woman who anoints Jesus with her tears and with ointment.  Jesus includes in his conversation with Simon (a Pharisee) a series of questions that leads Simon to the truth Jesus wants Simon to perceive.  The teaching is about forgiveness, and the value of that forgiveness.  For, the woman, however, the operative principal is not forgiveness, but rather faith.  She is proclaimed “a sinner” early in the reading, but we do not know what her sin was – we do know, however that her faith saved her.
The later verses name Mary Magdalene (cured of evil spirits) and it is unfortunate that Mary becomes trapped in the descriptor of “sinner”, as is the woman in the preceding passage.  It is interesting that Mary Magdalene, the Apostle to the Apostles, should be bound together in these readings today with Bathsheba, the mother of Solomon, and sinner as well.  What it does show, is that the faithful in every age include those who fail and are lifted up.  Perhaps that ought to be the point of our preaching.
Breaking open the Gospel:
After breaking open the Word, you might want to pray the Collect for Sunday:
Keep, O Lord, your household the Church in your steadfast faith and love, that through your grace we may proclaim your truth with boldness, and minister your justice with compassion; for the sake of our Savior Jesus Christ, who lives and reigns with you and the Holy Spirit, one God, now and for ever. Amen.