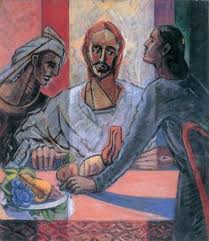 BACKGROUND: Interruptions
Earlier in the week Osama bin Laden was killed in Pakistan.  Travelling to Valparaiso University for their Institute of Liturgical Studies, I missed my usual fix of the New York Times and the San Francisco Chronicle.  In mid-week, however, it became clear to me that this action had placed many of us on the horns of a dilemma, and that our focus on the Eastertide lectionary was about to be interrupted in a powerful manner.  An email informed me that a member had requested that Osama bin Laden be included in our prayers for those who had died.  There was a quick response from the person who handles the prayers of the people – “No.”  There was also response from others who had other notions.  I was quick to be reminded of St. Matthew 5:43-48, where following the comments about the blessedness of peacemakers, there is the enjoinder to “love your enemies, and pray for those who persecute you.”  The joy of Easter has been interrupted by the exigencies of the world we live in.  Hidden in Emmaus, Pentecost, Psalm 116, and the I Peter are answers to my quandary.  Now I just have to find them.
Acts 2:14a, 36-41
Peter, standing with the eleven, raised his voice and addressed the multitude, "Let the entire house of Israel know with certainty that God has made him both Lord and Messiah, this Jesus whom you crucified."
Now when they heard this, they were cut to the heart and said to Peter and to the other apostles, "Brothers, what should we do?" Peter said to them, "Repent, and be baptized every one of you in the name of Jesus Christ so that your sins may be forgiven; and you will receive the gift of the Holy Spirit. For the promise is for you, for your children, and for all who are far away, everyone whom the Lord our God calls to him." And he testified with many other arguments and exhorted them, saying, "Save yourselves from this corrupt generation." So those who welcomed his message were baptized, and that day about three thousand persons were added. 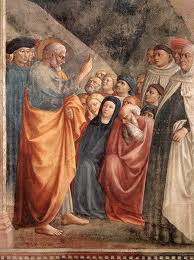 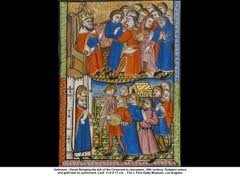 This is a psalm of thanksgiving – but for what?  Verse 3 gives us some clues.  It might be thanksgiving for delivery from a deadly illness, or like in psalm 18:5, death in a battle.  This dual use proves helpful to us on this day when we react to the joy that comes with each Sunday in Easter, and to the various problems that become apparent when an enemy has been killed.  Here too, death surrounds us, and we are met with distress and sorrow.  How does the psalmist, at the very least this psalmist, respond to his brush with death?  Naturally there is relief, but there is also pause, and questioning, “What can I give back to the Lord?”  This is the prayer to self that all of us need to pray.  The psalmist comes up with some possibilities: a libation, poured out as a return to God, taking seriously the vows made to God, a giving up of thanksgiving, and finally praise.  It is an ample spectrum of response. What would yours be?
Breaking open Psalm 16:
1.     What does the “cup of salvation” mean to you?
2.     Have you ever had a brush with death?
3.     How do you repay God?
I Peter 1:17-23
If you invoke as Father the one who judges all people impartially according to their deeds, live in reverent fear during the time of your exile. You know that you were ransomed from the futile ways inherited from your ancestors, not with perishable things like silver or gold, but with the precious blood of Christ, like that of a lamb without defect or blemish. He was destined before the foundation of the world, but was revealed at the end of the ages for your sake. Through him you have come to trust in God, who raised him from the dead and gave him glory, so that your faith and hope are set on God.
Now that you have purified your souls by your obedience to the truth so that you have genuine mutual love, love one another deeply from the heart. You have been born anew, not of perishable but of imperishable seed, through the living and enduring word of God. 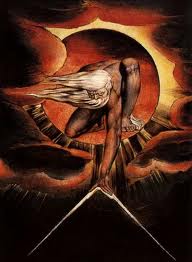 The author, perhaps Peter, looks deeply into the Christian experience.  Foundational is the realization that God is the judge (and here we could insert a variety of words that would give additional depth – critic, moderator, evaluator, and so on) of all.  The God who creates knows us intimately, and knows our intents.  It is this same God that rescues us from our past.  Not only does this God sit in judgment, but also redeems and rescues us.  And why is this done?  The answer is deceptively simple, and not so easily accomplished.  Like the judge who judges all with impartiality, so we are called to “love one another deeply from the heart”.  It is an impossible task, normally, but we are the children of an imperishable seed, God’s seed and image.  A higher standard has been set for us.
Breaking open I Peter:
Saint Luke 24:13-35
That very day, the first day of the week, two of the disciples were going to a village called Emmaus, about seven miles from Jerusalem, and talking with each other about all these things that had happened. While they were talking and discussing, Jesus himself came near and went with them, but their eyes were kept from recognizing him. And he said to them, "What are you discussing with each other while you walk along?" They stood still, looking sad. Then one of them, whose name was Cleopas, answered him, "Are you the only stranger in Jerusalem who does not know the things that have taken place there in these days?" He asked them, "What things?" They replied, "The things about Jesus of Nazareth, who was a prophet mighty in deed and word before God and all the people, and how our chief priests and leaders handed him over to be condemned to death and crucified him. But we had hoped that he was the one to redeem Israel. Yes, and besides all this, it is now the third day since these things took place. Moreover, some women of our group astounded us. They were at the tomb early this morning, and when they did not find his body there, they came back and told us that they had indeed seen a vision of angels who said that he was alive. Some of those who were with us went to the tomb and found it just as the women had said; but they did not see him." Then he said to them, "Oh, how foolish you are, and how slow of heart to believe all that the prophets have declared! Was it not necessary that the Messiah should suffer these things and then enter into his glory?" Then beginning with Moses and all the prophets, he interpreted to them the things about himself in all the scriptures. As they came near the village to which they were going, he walked ahead as if he were going on. But they urged him strongly, saying, "Stay with us, because it is almost evening and the day is now nearly over." So he went in to stay with them. When he was at the table with them, he took bread, blessed and broke it, and gave it to them. Then their eyes were opened, and they recognized him; and he vanished from their sight. They said to each other, "Were not our hearts burning within us while he was talking to us on the road, while he was opening the scriptures to us?" That same hour they got up and returned to Jerusalem; and they found the eleven and their companions gathered together. They were saying, "The Lord has risen indeed, and he has appeared to Simon!" Then they told what had happened on the road, and how he had been made known to them in the breaking of the bread. 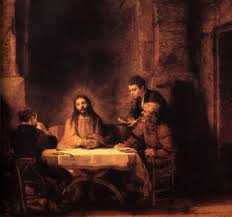 Luke bases his story on an old tradition of the emotions and thoughts that enter the hearts of those who are confronted by the Gospel especially those who see and hear the Easter Gospel.  An example of such a pattern is the story of Philip and the Eunuch.  The stages are simple:  1. Ordinary people, ignorant of Scripture, 2. Wondering about the meaning of events and the Scriptures, 3. Unaware of the teacher who is with them (him), 4. With explanation, they believe, and 5, the teacher disappears.  In the Emmaus recension of this pattern, Luke adds a crucial element, a clue, if you will, as to the identity of the teacher.  It is a clue that we all recognize – the broken bread, and the meal.  More importantly it is made known after an invitation on the part of the travelers to have Jesus stay with them.  The shared meal and the shared bread are the heart of the recognition.   Jesus is both absent and present following this act.  The story does not end there, however.  There is an opening of the eyes, and a willingness to tell and share.  All of the senses become involved: the seeing and hearing, the tasting and eating, the speaking and the understanding.
Breaking open the Gospel:
After breaking open the Word, you might want to pray the Collect for Sunday:
O God, whose blessed Son made himself known to his disciples in the breaking of bread: Open the eyes of our faith, that we may behold him in all his redeeming work; who lives and reigns with you, in the unity of the Holy Spirit, one God, now and for ever. Amen.