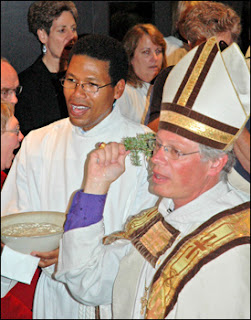 Background:  Renewal of Baptismal Vows - Asperges
The celebration of the Baptism of our Lord gives us several liturgical opportunities, one of which is the renewal of baptismal vows, and remembrance with the asperges (“wash me” from Psalm 51) a sprinkling of water.  Such remembrances are appropriate on The Baptism of Our Lord, The Great Vigil of Easter, Pentecost, and All Saints Day.  Although Baptism is a “one time only” event, such ceremonies give us the opportunity to remember and meditate on what our baptism means.  The sprinkling makes our meditations both real and physical.
Genesis 1:1-5
In the beginning when God created the heavens and the earth, the earth was a formless void and darkness covered the face of the deep, while a wind from God swept over the face of the waters. Then God said, "Let there be light"; and there was light. And God saw that the light was good; and God separated the light from the darkness. God called the light Day, and the darkness he called Night. And there was evening and there was morning, the first day. 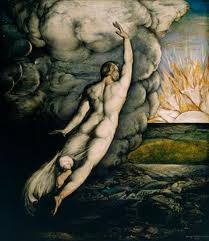 In order to tell the story of the patriarchal families and their relationship with God, the author of the priestly strand (P) of the Pentateuch needs to set up a stage, a mental platform upon which the relationship is acted out.  In doing so the author describes a single God acting out his will and way.  Unlike neighboring creation stories, in which the chaos gives birth to the gods, who then struggle for mastery, this story is simple in its intent.  God wills, and then observes, “it is good.”  The choice of this pericope for this day may have several justifications.  Perhaps it is the image of the Spirit (ruah – the “wind from God”, namely God’s very breath and word) blowing over the formless void, speaks volumes the Baptismal story of Jesus.  Or it might be the contrast between light and darkness, the contrast of what God wills with that which seems to occur naturally.  Or, perhaps, it might be the pronunciation “it is good”, a doublet for God’s pronunciation, “with you I am well pleased.”
Breaking open Genesis:
Psalm 29 Afferte Domino
Ascribe to the LORD, you gods, *
ascribe to the LORD glory and strength.
Ascribe to the LORD the glory due his Name; *
worship the LORD in the beauty of holiness.
The voice of the LORD is upon the waters;
the God of glory thunders; *
the LORD is upon the mighty waters.
The voice of the LORD is a powerful voice; *
the voice of the LORD is a voice of splendor.
The voice of the LORD breaks the cedar trees; *
the LORD breaks the cedars of Lebanon;
He makes Lebanon skip like a calf, *
and Mount Hermon like a young wild ox.
The voice of the LORD splits the flames of fire;
the voice of the LORD shakes the wilderness; *
the LORD shakes the wilderness of Kadesh.
The voice of the LORD makes the oak trees writhe *
and strips the forests bare.
And in the temple of the LORD *
all are crying, "Glory!"
The LORD sits enthroned above the flood; *
the LORD sits enthroned as King for evermore.
The LORD shall give strength to his people; *
the LORD shall give his people the blessing of peace. 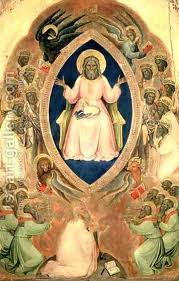 The Lord enthroned above the flood is the perfect visual and vocabulary for this feast day, but what did it mean to the reader.  Some commentators have seen this psalm as a reworking by the psalmist of an earlier Canaanite poem.  Though that might be possible it is not probable.  The vocabulary and setting of the psalm were of the common liturgical and mythic language of the Levant.  The character that attracts us is “the voice”, and in it we see Saint John’s model for “the Word.”  What is truly interesting is the scope of the psalmist’s vision.  Although Israel is mentioned by name, the geographical setting is a bit more expansive: Lebanon, the Kadesh, the “Waters”, and the forests.  It is in a wider world that God speaks, and creation speaks as well.  In the initial verse it is Israel who is invited to speak words of praise to God, and in the final verse it is God who blesses Israel with God’s voice.
Breaking open Psalm 29
Acts 19:1-7
While Apollos was in Corinth, Paul passed through the interior regions and came to Ephesus, where he found some disciples. He said to them, "Did you receive the Holy Spirit when you became believers?" They replied, "No, we have not even heard that there is a Holy Spirit." Then he said, "Into what then were you baptized?" They answered, "Into John's baptism." Paul said, "John baptized with the baptism of repentance, telling the people to believe in the one who was to come after him, that is, in Jesus." On hearing this, they were baptized in the name of the Lord Jesus. When Paul had laid his hands on them, the Holy Spirit came upon them, and they spoke in tongues and prophesied-- altogether there were about twelve of them. 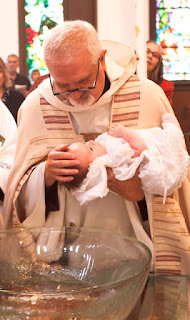 In this reading we get a view of a developing church, and its understanding of the Sacraments.  Here Paul comes into Ephesus to find a group of Christians who do not know of the Holy Spirit, and who have been baptized into “John’s baptism.”  Paul goes on to explain the difference, not only for the benefit of the church at Ephesus, but for us readers as well.  Yes, there was a baptism of John, and early writers in the church make certain to distinguish the act of John from the baptismal talk of Jesus.  The divide is described in the words “repentance” (John’s baptism) and the baptism of Jesus “in the Spirit”, namely that they were anointed by the Spirit who blew over the deep, gave voice to the Word, anointed priests, prophets, and kings, and who appears at the baptism of Jesus at the Jordan.  There is an immediate reaction that Paul describes.  These newly baptized daughters and sons of the Spirit “speak in tongues” (they have a message for everyone) and prophesy (they know God’s word for their own time and place.)
Breaking open Acts:
Mark 1:4-11
John the baptizer appeared in the wilderness, proclaiming a baptism of repentance for the forgiveness of sins. And people from the whole Judean countryside and all the people of Jerusalem were going out to him, and were baptized by him in the river Jordan, confessing their sins. Now John was clothed with camel's hair, with a leather belt around his waist, and he ate locusts and wild honey. He proclaimed, "The one who is more powerful than I is coming after me; I am not worthy to stoop down and untie the thong of his sandals. I have baptized you with water; but he will baptize you with the Holy Spirit."
In those days Jesus came from Nazareth of Galilee and was baptized by John in the Jordan. And just as he was coming up out of the water, he saw the heavens torn apart and the Spirit descending like a dove on him. And a voice came from heaven, "You are my Son, the Beloved; with you I am well pleased." 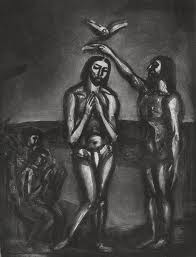 These early verses in the Gospel of Mark function in a manner similar to the Prologue in the Gospel of John.  John places the reader at the beginning of creation, there to realize the presence of the Word – Jesus.  Mark has a similar preamble, only here it is more like a prelude in which we hear of the ministry of John, and his vision of what Jesus will be.  Mark describes John’s baptism, and then has John describe how it is different from the baptism that Jesus will promulgate (he will baptize you with the Holy Spirit).  The actual baptism of Jesus is known only to Jesus, and the reader, but not to those standing by.  There are four revelations: a) the heavens are “torn apart” (as in Isaiah 64) so that a new creation might be had, b) the descent of the Spirit (so that Jesus, like Israel in Isaiah 63:11, 14, who is constituted as a people by the Spirit, so Jesus becomes God’s own), c) “like a dove”, the dove was a symbol of Israel – so now Jesus represents in his person Israel, and d) “the Voice” that comes out of the heavens (See Isaiah 42:1) to pronounce Jesus as the “Son of God.”  All of this plays into Mark’s supposed “secrecy motif”.  The crowds that gather are unaware of the significance of the act.  Like Israel at the Exodus, Jesus, comes up out of the water.  It will take other works, words, and signs for those who stand by to understand who Jesus really is.
Breaking open the Gospel:
After breaking open the Word, you might want to pray the Collect for Sunday:
Father in heaven, who at the baptism of Jesus in the River Jordan proclaimed him your beloved Son and anointed him with the Holy Spirit: Grant that all who are baptized into his Name may keep the covenant they have made, and boldly confess him as Lord and Savior; who with you and the Holy Spirit lives and reigns, one God, in glory everlasting. Amen.