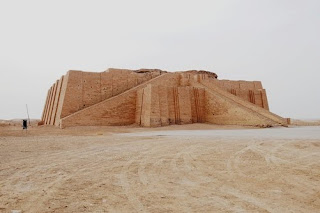 This reading is a good example of an etiological tale, namely, a tale that explains a name, or place, or a natural landmark.  We know from the story of Abraham, that the Hebrews were the descendents of tribes who moved from the ancient cities of Mesopotamia up and then down the Fertile Crescent into the Palestinian plain.  These peoples would have remembered the great ziggurats of these cities, artificial mountains that were homes for the gods.  So the story explains the emergence of languages and the great temples of the Mesopotamian cities.  Its use here, on this day, underscores the many languages spoken on Pentecost in Jerusalem, and the miracle that they understood what Peter was preaching to them.
Breaking open Genesis
Psalm 104:25-35, 37b Benedic, anima mea
O LORD, how manifold are your works! *
in wisdom you have made them all; the earth is full of your creatures.
Yonder is the great and wide sea with its living things too many to number, *
creatures both small and great.
There move the ships, and there is that Leviathan, *
which you have made for the sport of it.
All of them look to you *
to give them their food in due season.
You give it to them; they gather it; *
you open your hand, and they are filled with good things.
You hide your face, and they are terrified; *
you take away their breath,
and they die and return to their dust.
You send forth your Spirit, and they are created; *
and so you renew the face of the earth.
May the glory of the LORD endure for ever; *
may the LORD rejoice in all his works.
He looks at the earth and it trembles; *
he touches the mountains and they smoke.
I will sing to the LORD as long as I live; *
I will praise my God while I have my being.
May these words of mine please him; *
I will rejoice in the LORD.
Hallelujah! 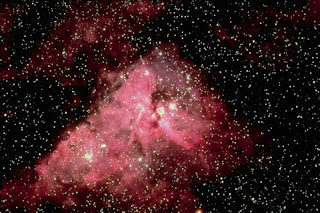 This psalm rehearses the works of creation, and moves beyond the mythological representation of creation, to the real.  The sea mentioned in verse 25 “wide and great” is not the primordial sea, the sea of chaos that God overcomes, but rather the real sea upon which ships moved.  The giant sea monster is no longer a threat but a plaything.  Of great interest here, especially on this day, is the interplay of “spirit” and “breath”, really the same word.  Life itself is breathed into creation by God; and this psalm celebrates this fact: “You send forth your breath, they are created”.  The psalmist mentions all kinds of response to the Creator, all of which employ the God-given breath: singing, hymning, speaking, and rejoicing.  Even the verse 34, “as long as I live…” could really be translated, “as long as I breathe…” (live).
Breaking open Psalm 97
1.     How is the creation of ships that ply the sea, and belittle the Leviathan different from the creation of a tower that challenged the s
2.     What Pentecost themes do you see in this psalm?
3.     Is creation renewed in the Church?
Romans 8:14-17
All who are led by the Spirit of God are children of God. For you did not receive a spirit of slavery to fall back into fear, but you have received a spirit of adoption. When we cry, "Abba! Father!" it is that very Spirit bearing witness with our spirit that we are children of God, and if children, then heirs, heirs of God and joint heirs with Christ-- if, in fact, we suffer with him so that we may also be glorified with him.
This reading addresses two Pentecost themes.  The first is the Spirit who bears witness to our becoming children of God.  The second is a baptismal theme, which talks about our adoption as God’s sons and daughters.  It is interesting that Paul does not sugarcoat his baptismal commentary, but rather discusses its harsh realities.  That “we suffer with him” is indeed the result to staking our claim with Jesus Christ.  Paul links the necessity of the suffering and the promised glory.
Breaking open Revelation: 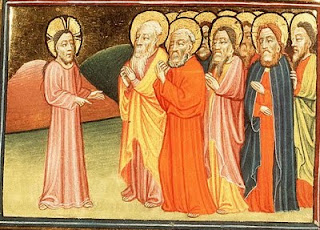 Saint John 14:8-17, 25-27
Philip said to Jesus, "Lord, show us the Father, and we will be satisfied." Jesus said to him, "Have I been with you all this time, Philip, and you still do not know me? Whoever has seen me has seen the Father. How can you say, `Show us the Father'? Do you not believe that I am in the Father and the Father is in me? The words that I say to you I do not speak on my own; but the Father who dwells in me does his works. Believe me that I am in the Father and the Father is in me; but if you do not, then believe me because of the works themselves. Very truly, I tell you, the one who believes in me will also do the works that I do and, in fact, will do greater works than these, because I am going to the Father. I will do whatever you ask in my name, so that the Father may be glorified in the Son. If in my name you ask me for anything, I will do it.
"If you love me, you will keep my commandments. And I will ask the Father, and he will give you another Advocate, to be with you forever. This is the Spirit of truth, whom the world cannot receive, because it neither sees him nor knows him. You know him, because he abides with you, and he will be in you."
"I have said these things to you while I am still with you. But the Advocate, the Holy Spirit, whom the Father will send in my name, will teach you everything, and remind you of all that I have said to you. Peace I leave with you; my peace I give to you. I do not give to you as the world gives. Do not let your hearts be troubled, and do not let them be afraid."
Philip at least is honest.  He wants to know all of the secrets.  Jesus is honest in return, for he doesn’t diminish his claim.  “Know me, and you know the father”.  It’s a good question for God’s people to ask, “How are we to know?”  Jesus’ answer is simple, “just look at the works.”  It is a question that the world quite rightly asks of the Church every day, and we ought to be able to give a good answer.  If there is something missing, if there is an element that seems to have been forgotten, Jesus promises it in the Spirit.  In this discussion that accompanies the last supper, Jesus gives a crash course on the Kingdom of God and what it means to be a part of that kingdom.  The mad rush of Passion Week events will confuse the disciples, and they will not know what to say or to confess (for example, Peter’s denial).  Jesus says that there are two catalysts that he leaves with them: the commandment about loving, and the gift of the Spirit.  These ought to help us be a sufficient witness to the world’s confusion and questions.
Breaking open the Gospel:
After breaking open the Word, you might want to pray the Collect for Sunday:
Almighty God, on this day you opened the way of eternal life to every race and nation by the promised gift of your Holy Spirit: Shed abroad this gift throughout the world by the preaching of the Gospel, that it may reach to the ends of the earth; through Jesus Christ our Lord, who lives and reigns with you, in the unity of the Holy Spirit, one God, for ever and ever. Amen.