The Holy Trinity
BACKGROUND
With a reading from Genesis before us, we need to take a moment to see how Genesis was written.  The tradition is that it is from the hand of Moses, thus the Pentateuch, or the Five Books of Moses.  Scholars, however, have used another theory when discussing the source of these materials, and have proposed several “strands”.  Today’s reading in the Hebrew Scriptures is in the “J” tradition, so named because of his use of the name JAHWEH (YAHWEH) for God.  These traditions come largely from the Southern Kingdom of Judah, and the Aaronic priesthood.  Another strand is the “E” strand, where the name for God is Elohim, and the content comes largely from the Northern Kingdom of Israel, and the Levitical priesthood.  The other strand is the P (for Priestly) strand, which is concerned with Temple life and law.  It may have originated during or after the Exile.  All of these become a part of the mosaic of the Book of Genesis
Genesis 18:1-10a
The LORD appeared to Abraham by the oaks of Mamre, as he sat at the entrance of his tent in the heat of the day. He looked up and saw three men standing near him. When he saw them, he ran from the tent entrance to meet them, and bowed down to the ground. He said, "My lord, if I find favor with you, do not pass by your servant. Let a little water be brought, and wash your feet, and rest yourselves under the tree. Let me bring a little bread, that you may refresh yourselves, and after that you may pass on-- since you have come to your servant." So they said, "Do as you have said." And Abraham hastened into the tent to Sarah, and said, "Make ready quickly three measures of choice flour, knead it, and make cakes." Abraham ran to the herd, and took a calf, tender and good, and gave it to the servant, who hastened to prepare it. Then he took curds and milk and the calf that he had prepared, and set it before them; and he stood by them under the tree while they ate.
They said to him, "Where is your wife Sarah?" And he said, "There, in the tent." Then one said, "I will surely return to you in due season, and your wife Sarah shall have a son."
We are essentially reading a family history with this reading from Genesis.  The history is unusual in that the editor of this strand of Genesis has pulled together various traditions in this chapter and the chapter following.  This author, sees in the three guests, a manifestation of the God of Abraham, and indeed this subject serves as the iconic representation of the Holy Trinity.  That Abraham greets them and serves them food and drink would have been expected in this nomadic tradition and culture.  The real subject, and the focus of the character’s interest is Abraham’s lack of a son and heir.  Abraham actually has a son by his mistress and servant Hagar, but that is not enough.  This family needs for Abraham to have a son by means of his wife Sarah.  That is the promise that will sustain them both.
Breaking open Deuteronomy:
1.     Why was the law of hospitality so important at the time of Abraham.
2.     Why is this story used as an icon of the Holy Trinity?
3.     What is the promise?  Why is it so important? 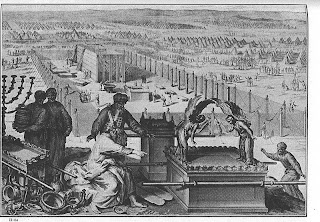 The Tabernacle
Psalm 15 Domine, quis haitabit?
LORD, who may dwell in your tabernacle? *
who may abide upon your holy hill?
Whoever leads a blameless life and does what is right, *
who speaks the truth from his heart.
There is no guile upon his tongue;
he does no evil to his friend; *
he does not heap contempt upon his neighbor.
In his sight the wicked is rejected, *
but he honors those who fear the LORD.
He has sworn to do no wrong *
and does not take back his word.
He does not give his money in hope of gain, *
nor does he take a bribe against the innocent.
Whoever does these things *
shall never be overthrown.
Some have seen in this psalm a sort of “catechism” about who is righteous and worthy enough to enter the Temple (or the Tabernacle, both are mentioned.)  This translation misses a nuance in the first verse, where the verb “dwell” in Hebrew is really “sojourn” marking the temporary nature of the Tabernacle and its placement.  The “holy hill” refers to Zion and Jerusalem, where the Temple was built.  The ambiguity of this first verse aptly portrays the whole history of Israelite worship prior to the Exile.  What follows is a recitation of righteousness, in which the psalmist notes (not unlike St. Paul) a list of worthy behaviors.
Breaking open Psalm 32
1.     Take a moment and enumerate the virtues listed by the psalm?
2.     What are your feelings about the verse that prohibits usury, “he does not give his money in hope of gain?”
3.     How practical are the suggestions here?
Colossians 1:15-28
Christ Jesus is the image of the invisible God, the firstborn of all creation; for in him all things in heaven and on earth were created, things visible and invisible, whether thrones or dominions or rulers or powers-- all things have been created through him and for him. He himself is before all things, and in him all things hold together. He is the head of the body, the church; he is the beginning, the firstborn from the dead, so that he might come to have first place in everything. For in him all the fullness of God was pleased to dwell, and through him God was pleased to reconcile to himself all things, whether on earth or in heaven, by making peace through the blood of his cross.
And you who were once estranged and hostile in mind, doing evil deeds, he has now reconciled in his fleshly body through death, so as to present you holy and blameless and irreproachable before him-- provided that you continue securely established and steadfast in the faith, without shifting from the hope promised by the gospel that you heard, which has been proclaimed to every creature under heaven. I, Paul, became a servant of this gospel.
I am now rejoicing in my sufferings for your sake, and in my flesh I am completing what is lacking in Christ's afflictions for the sake of his body, that is, the church. I became its servant according to God's commission that was given to me for you, to make the word of God fully known, the mystery that has been hidden throughout the ages and generations but has now been revealed to his saints. To them God chose to make known how great among the Gentiles are the riches of the glory of this mystery, which is Christ in you, the hope of glory. It is he whom we proclaim, warning everyone and teaching everyone in all wisdom, so that we may present everyone mature in Christ.
Paul doesn’t waste any time, after his initial greetings to the Church at Colossae, to get to the topic at hand – the all-sufficient character of Jesus, the Christ.  The clues about the argument are served up already in verse 15 where Paul mentions “thrones, dominions, rulers, and powers.”  These “spirits” were thought to be in total control of the world, or at least that was what some Jewish sects thought at the time.  Paul wants to make it perfectly clear that the Christ is in charge, for all of these things dwell in him.  “He himself is before all things,” Paul emphatically states.  Then Paul presents a model of Christ, in which he, Paul, personally participates.  It is Christ who reconciled the difficulties of human kind in his body of flesh, and so Paul follows that example in his own afflictions and sufferings.
Breaking open Colossians: 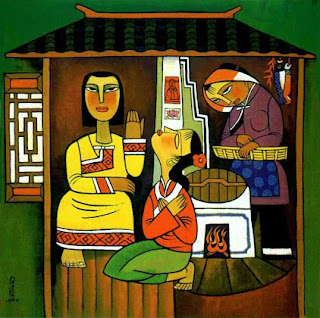 Mary and Martha
Saint Luke 10:38-42
As Jesus and his disciples went on their way, Jesus entered a certain village, where a woman named Martha welcomed him into her home. She had a sister named Mary, who sat at the Lord's feet and listened to what he was saying. But Martha was distracted by her many tasks; so she came to him and asked, "Lord, do you not care that my sister has left me to do all the work by myself? Tell her then to help me." But the Lord answered her, "Martha, Martha, you are worried and distracted by many things; there is need of only one thing. Mary has chosen the better part, which will not be taken away from her."
Here the lectionary connects the Hebrew reading with the Gospel by a very tenuous thread – the hospitality of Abraham and Martha.  The point that Luke wants to make, as he structures these stories (this falls immediately after the Good Samaritan, which we read last Sunday) to serve as a case study of what it means to live the Gospel.  The story of the Good Samaritan points out the practicalities of Christian life, while the story of Mary and Martha accentuates the necessity of faith along with the works.  Martha is not put down, but serves only as one part of the equation.
Breaking open the Gospel:
After breaking open the Word, you might want to pray the Collect for Sunday:
Almighty God, the fountain of all wisdom, you know our necessities before we ask and our ignorance in asking: Have compassion on our weakness, and mercifully give us those things which for our unworthiness we dare not, and for our blindness we cannot ask; through the worthiness of your Son Jesus Christ our Lord, who lives and reigns with you and the Holy Spirit, one God, now and for ever. Amen.