This is a series that appears in the weekly Newsletter of Trinity Church; designed to get you ready to hear the lessons at next Sunday’s liturgy.  Your suggestions and comments are most welcome.

The Readings for the First Sunday of Advent 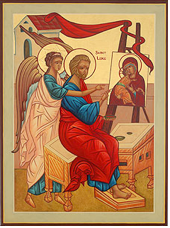 BEFORE WE BEGIN – ABOUT SAINT LUKE

This is the longest of the Gospels, and is one of the Synoptic (“with one eye”) Gospels (Matthew and Mark being the others).  It is written from a Gentile perspective, and is addressed, along with its companion volume, Acts, to a person named Theophilus.  The book was probably written sometime late in the First Century, perhaps after the destruction of the Jerusalem temple by the Romans in 70 CE.  The sources that underlie the book are The Gospel of Mark, which supplies a great deal of the chronology, and a theoretical source called “The Sayings Gospel”, or “Q” (from the German word quelle, or “source) for the sayings of Jesus.

Luke is best known for its Birth Narrative, which is known by most people.  The Gospel of Luke places no small emphasis on poverty, and the status of women (this is especially true in Acts), and other oppressed groups.  Often, characters in the book will break into song, which are the sources for the canticles sung at Evensong, and Morning Prayer.  Other themes include the Holy Spirit, prayer, and joyfulness.  As we move through the liturgical year, I will write more about Luke and his strong theology of inclusion.  There are a couple of interesting traditions about Luke.  One is that he was a physician – hence the name of hospitals (our own Saint Luke’s being an example).  Another tradition is that he was a painter, who painted an icon of Our Lady.

The reading from the Hebrew Scriptures is from Jeremiah, a prophet who was active ca. 626 – 587 BCE.  He was active during the reign of King Josiah, who engineered a huge religious reform during his rule.  Jeremiah was also present during the assault on Jerusalem by the Babylonians, and was exiled to Egypt following the fall of Jerusalem.  He was opposed to most of the political solutions of his day, and provided an individualistic and spiritual cast to his theology.

Psalm 25 is an acrostic – the initial letter of each verse spelling out the Hebrew alphabet – only one letter is missing – the “q”.  It is a David psalm.

First Thessalonians, a letter from Saint Paul to the Christians in Thessalonica, is the first piece of Christian literature to be written that is still extant.  It was written around 52 CE, from Corinth.  The content and style matches other Pauline works.

For notes on the Gospel of Luke, see the introduction above.


The days are surely coming, says the LORD, when I will fulfill the promise I made to the house of Israel and the house of Judah. In those days and at that time I will cause a righteous Branch to spring up for David; and he shall execute justice and righteousness in the land. In those days Judah will be saved and Jerusalem will live in safety. And this is

Jeremiah is looking beyond the troubles of his own time.  The days that he has seen “surely coming” are days of trouble and tribulation – and indeed that did come true with the desolation of Jerusalem by King Nebuchadnezzar of Babylon.  Jeremiah sees other days, however, days that are full of a promise from God – days when the Davidic kingship will be restored.  In his characterization of such a kingship he defines what its core values ought to be (righteousness and justice.)  This perfectly matches the Advent theme of looking beyond the end of time, to the coming of the Messiah, for it is the messiah (the anointed one) who is the “righteous branch” springing from the stump of the tree (Judah’s kings) that has been cut down.  Something new is coming. 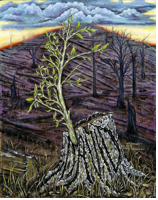 
To you, O LORD, I lift up my soul;
my God, I put my trust in you; *
let me not be humiliated,
nor let my enemies triumph over me.

Let none who look to you be put to shame; *
let the treacherous be disappointed in their schemes.

Show me your ways, O LORD, *
and teach me your paths.

Lead me in your truth and teach me, *
for you are the God of my salvation;
in you have I trusted all the day long.

Remember, O LORD, your compassion and love, *
for they are from everlasting.

Remember not the sins of my youth and my transgressions; *
remember me according to your love
and for the sake of your goodness, O LORD.

Gracious and upright is the LORD; *
therefore he teaches sinners in his way.

He guides the humble in doing right *
and teaches his way to the lowly.

All the paths of the LORD are love and faithfulness *
to those who keep his covenant and his testimonies.

The initial verses of this Psalm are especially personal and intimate.  If this was written by David, we see a portrait of a man who is not above admitting his faults.  The first six verses recount his personal dependence upon the Lord.  The remaining verses shift their attention from the behavior of the writer to the behavior of God.  If this is indeed a royal psalm, it is one in which we have a rather humble view of the writer’s relationship with the divine, and with himself.


How can we thank God enough for you in return for all the joy that we feel before our God because of you? Night and day we pray most earnestly that we may see you face to face and restore whatever is lacking in your faith.

Paul has sent his assistant Timothy to check on the Thessalonians, and in this letter he greets and encourages them.  Paul greets them at a distance, and indicates his desire to see them “face to face.”  He is concerned for the spiritual health, and talks to them about “whatever is lacking in their faith”, “abound in love for one another and for all,” “strengthen your hearts in holiness.”  In the final sentence, Paul makes mention of an Advent hope – that Jesus will come again – with all of his saints.


Jesus said, "There will be signs in the sun, the moon, and the stars, and on the earth distress among nations confused by the roaring of the sea and the waves. People will faint from fear and foreboding of what is coming upon the world, for the powers of the heavens will be shaken. Then they will see 'the Son of Man coming in a cloud' with power and great glory. Now when these things begin to take place, stand up and raise your heads, because your redemption is drawing near."


Then he told them a parable: "Look at the fig tree and all the trees; as soon as they sprout leaves you can see for yourselves and know that summer is already near. So also, when you see these things taking place, you know that the kingdom of God is near. Truly I tell you, this generation will not pass away until all things have taken place. Heaven and earth will pass away, but my words will not pass away.


"Be on guard so that your hearts are not weighed down with dissipation and drunkenness and the worries of this life, and that day catch you unexpectedly, like a trap. For it will come upon all who live on the face of the whole earth. Be alert at all times, praying that you may have the strength to escape all these things that will take place, and to stand before the Son of Man."

For the last couple of Sundays we have been looking at apocalyptic (literature which looks at what is hidden, from which “the veil has been lifted.”).  This section of the Gospel of Luke represents an apocalyptic section as well.  Jesus teaches his hearers to interpret the signs of the times, using the buds on a fig tree as examples of what is to come. 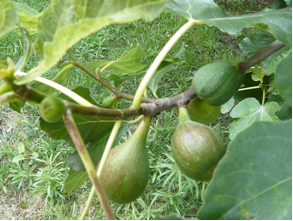 In this teaching, Jesus talks about the coming of the “Son of Man” – an image we first met last Sunday in the reading from Daniel.  The “Son of Man” is a code word for Jesus himself, the one who comes after death and resurrection to again redeem the earth for himself.  Jesus tries to point to the signs of the coming of the Son of Man.  Last Sunday’s signs were “wars and rumors of wars.”  This Sunday’s signs are “signs in the sun, and moon, and stars, distress among nations, people in fear and foreboding.”  It was a difficult time for Luke’s readers.  If they were living in Palestine, they had seen the fall of Jerusalem and the destruction of the temple at the hands of the Romans.  We can see how well Jeremiah’s experience fits here as well.  In such an atmosphere of dread, it is only natural to hope for the coming of a redeemer who will make all things new.

Almighty God, give us grace to cast away the works of darkness, and put on the armor of light, now in the time of this mortal life in which your Son Jesus Christ came to visit us in great humility; that in the last day, when he shall come again in his glorious majesty to judge both the living and the dead, we may rise to the life immortal; through him who lives and reigns with you and the Holy Spirit, one God, now and for ever. Amen.