This is a series that will hopefully appear in the weekly Newsletter of Trinity Church; designed to get you ready to hear the lessons at next Sunday’s liturgy.  Your suggestions and comments are most welcome.

The Readings for Christ the King

The stage was set for these readings in the previous two Sundays, and again we read from the prophet Daniel, in the second half of the book bearing his name, which is a collection of four visions of the “End Time”.  A brief recap of last week’s introduction: Daniel was probably written during the Hellenistic period in Palestine (3rd Century BCE) during which time the locals were in a cultural, and actual, war with the Seleucid kings who ruled from Syria.  The visions in Daniel attempted to give the reader a sense of their Jewish heritage and what was to come.  These works are also heavenly influenced by the Persian world, which was the setting of Israel’s “exile” for some years.

The second reading is from Revelation, a survival manual written by an un-named bishop in Asia Minor who encourages his readers to resist the cultural pressure of the Roman imperium.

The Gospel is from John, the latest and most complex of the Gospels.  Heavily influenced by Greek thought, John is the most literary and theological of the gospels.  It depends neither on Mark, nor Luke and Matthew for its material, and has a thoroughly original interpretation of the origins of Jesus, told in a

retelling of the Creation Narrative, in which the creative force is the Logos (the Greek word for “word”) which is identified with Jesus.  Also of great interest in John, is his “Book of Signs” in which he tells of Jesus’ miracles, and of his lengthy discourses to the disciples as a group and to Nicodemus in particular. 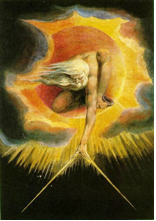 thrones were set in place,

and an Ancient One took his throne,

his clothing was white as snow,

and the hair of his head like pure wool;

his throne was fiery flames,

and its wheels were burning fire.

A stream of fire issued

and flowed out from his presence.

A thousand thousands served him,

The court sat in judgment,

and the books were opened.

As I watched in the night visions,

coming with the clouds of heaven.

And he came to the Ancient One

and was presented before him.

To him was given dominion

and glory and kingship,

that all peoples, nations, and languages

His dominion is an everlasting dominion

that shall not pass away,

and his kingship is one

that shall never be destroyed.

This wonderful piece of poetry, which serves to influence some of the poetry in the Book of Revelation, gives us a stunning vision of Oriental, specifically Persian, kingship, which would have been the world in which the author(s) of Daniel lived.  Such a vision is not unusual in the Hebrew Scriptures.  The book of Job speaks about the heavenly court (Job 1:6-11), and in the Vision of Isaiah (Isaiah 6:1-13) we have a splendid account of God as oriental monarch.  In this vision of Daniel, we also have a picture of  “a human being” who is presented to the Ancient of Days.  To this being are given dominions, and powers (you should be hearing Handel’s Messiah in the back of your mind at this point).

This character makes another appearance in Daniel 3, in the story of the three men in the fiery furnace, when one appears with them in the furnace: “"Look! I see four men walking around in the fire, unbound and unharmed, and the fourth looks like a son of the gods."  This character was identified by the early Christians, as “the Son of Man”, read Jesus; thus its inclusion in the lectionary for this day, The Feast of Christ the King.  The language and feel of these visions is used in Revelation as it celebrates the Lamb, and the heavenly court that gathers around the Lamb (Jesus).

The LORD is King;
he has put on splendid apparel; *
the LORD has put on his apparel
and girded himself with strength.

He has made the whole world so sure *
that it cannot be moved;

Ever since the world began, your throne has been established; *
you are from everlasting.

Your testimonies are very sure, *
and holiness adorns your house, O LORD,
for ever and for evermore.

Kingship was so important in the ancient near east, that the Hebrews tribes found it necessary to adopt the institution, in spite of their loose federation of tribes.  It was simply the overwhelming institution in the cultures around them.  In these agrarian societies, centered in a city/temple, the enthronement of the King (Priest/God) was an enactment of the fertilization of the earth.  Such was the psychological power of this political and liturgical model.

This psalm gives a splendid vision of God as a monarch, and may borrow some of its images from its Canaanite environment.  There is one image that seems out of place in this psalm, and that is the image of the “waters”.  Hebrews had a profound fear and respect of the sea.  They came from nomads, who “sailed” across sands, but not waves.  These people were not sailors, and the waters represented to them “death.”  The psalms often speak of death in terms of the “waves of death”.  The waters of the sea also represented the first act of creation – “the earth was without form and void”.  From this ball of mud and chaos, God divides land from the sea.  Thus it is that the image of God as a king who not only rules over the sea, but who is also lauded by the sound of the many waters.  This is a God of creation, not a Canaanite god of the fields.

Grace to you and peace from him who is and who was and who is to come, and from the seven spirits who are before his throne, and from Jesus Christ, the faithful witness, the firstborn of the dead, and the ruler of the kings of the earth.

To him who loves us and freed us from our sins by his blood, and made us to be a kingdom, priests serving his God and Father, to him be glory and dominion forever and ever. Amen.

Look! He is coming with the clouds;

every eye will see him,

even those who pierced him;

and on his account all the tribes of the earth will wail.

"I am the Alpha and the Omega," says the Lord God, who is and who was and who is to come, the Almighty.

In Revelation, the author needs to convince the reader of the authority by which he receives his vision, and by what divine influence he can make his pronouncements to the churches of Asia Minor.  This chunk of territory (modern day Turkey) had hosted many ancient civilizations (Greek, Hittite, Assyrian, Trojan) and in the time of the writing of this book, the Romans.  It was the site of ancient Greek cities, such as Ephesus, which became a part of Paul’s missionary strategy.  Roman military strategy garrisoned several legions in Asia Minor, and so Mithraism (a religion popular with the military) and the cult of the emperor were very popular.  With that in mind, the initial passages in the book introduce us to a majestic Christ, a ruler, savior, and kyrios (Lord) who would serve as a contrast to the Roman imperium.  The titles of “Savior” and “Lord” were political terms, which the Church applies to Jesus.  He is the alternative to the Roman rule.

The alpha and omega refer to the beginning and last characters in the Greek alphabet.  So, in Revelation, and in Johannine theology in general, Jesus is the beginning of all things, and the summation of all things, or as a later theologian, Theilhard de Chardin would call him, “the omega point.” 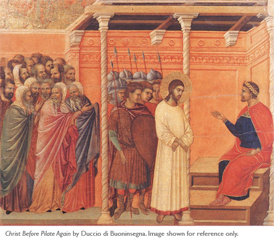 Pilate entered the headquarters again, summoned Jesus, and asked him, "Are you the King of the Jews?" Jesus answered, "Do you ask this on your own, or did others tell you about me?" Pilate replied, "I am not a Jew, am I? Your own nation and the chief priests have handed you over to me. What have you done?" Jesus answered, "My kingdom is not from this world. If my kingdom were from this world, my followers would be fighting to keep me from being handed over to the Jews. But as it is, my kingdom is not from here." Pilate asked him, "So you are a king?" Jesus answered, "You say that I am a king. For this I was born, and for this I came into the world, to testify to the truth. Everyone who belongs to the truth listens to my voice."

The Trial of Jesus has two distinct aspects to it.  The first is the charge of “blasphemy” which is adjudicated in the court of the High Priest.  The second charge is political, and that charge is brought to the Romans, distinctly the governor, Pontius Pilate, who interrogates Jesus about the charge.  “Are you king of the Jews?” Pilate asks.  The answer will not be so simple.  The kingdom of God, or the kingdom of heaven is the heart of Jesus’ preaching and message, but what are we to make of it.  Pilate attempts, in vain, to get to it, but doesn’t understand it.  Charged with a political crime, Jesus is at pains to explain that his actions are from opposite motives.

Almighty and everlasting God, whose will it is to restore all things in your well-beloved Son, the King of kings and Lord of lords: Mercifully grant that the peoples of the earth, divided and enslaved by sin, may be freed and brought together under his most gracious rule; who lives and reigns with you and the Holy Spirit, one God, now and for ever. Amen.